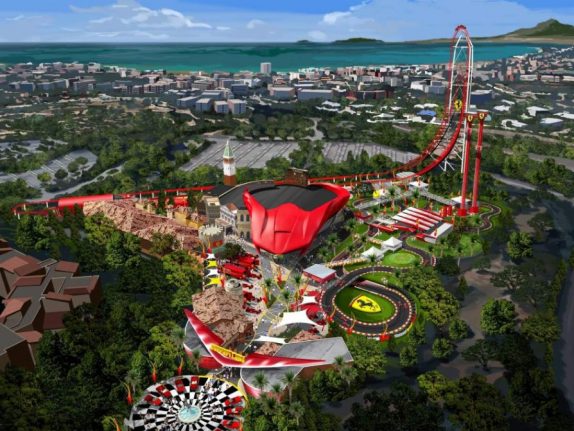 Tickets go on sale from Tuesday January 31st with a price of €60 per day per adult.

The ‘vertical accelerator’ will zoom adrenaline junkies along a track from 0 to at 180 km/h in five seconds before soaring up to a height of 112 meters and then plunging them down the other side.

“The acceleration is going to be even quicker than a Formula One car,” explained Marc Gené, a Ferrari Formula One test driver working with Ferrari Land.

“Attractions will allow visitors to experience first hand some of the sensations of driving a Formula One racing car. It’s a park for all ages, where even the youngest members of the family can discover the legendary spirit of Ferrari,” Gené said.

The famous Italian sports carmaker struck a deal with the PortAventura World, a park an hour’s drive south of Barcelona to develop the Ferrari themed park with an investment of €100 million.

The park will include a race track, Formula One simulators and two ‘bounce back’ free fall towers, which launch passengers in two directions from a height of 55 meters.

The new adventure park will include eight attractions as well as a Little Italy with replicas of Rome’s Colosseum, La Scala opera house in Milan, Piazza San Marco in Venice and the Palazzo Vecchio in Florence.