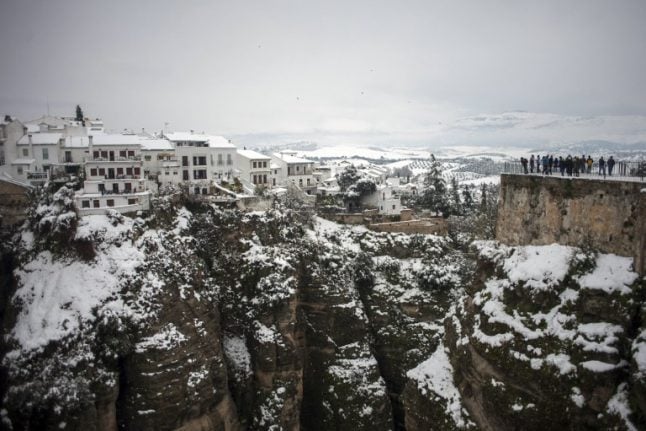 Spanish weather agency Aemet has issued warnings for parts of the country on Friday that include alerts for heavy snow fall in the Madrid area as well as Aragon and Catalonia.

As much as 20 to 25cm of snow could fall in on the higher ground in these areas, the agency warned in its Friday morning bulletin.

Aragon was on Orange alert for snow, meaning a “significant risk”.

There was the same level of warning in place for the mountains around Madrid, where 20cm of snow could fall in higher areas.

Areas at a lower altitude – around 900metres, could also see around 10cm of snow. (The orange areas show where heavy snowfall is expected, while the areas coloured yellow can also expect snow, although less of it. The coastal areas marked yellow will be hit by strong winds)

Drivers in the area near the Guadarrama mountain range are being warned of potentially dangerous conditions on the roads. Some train services out to the mountains had to be suspended.

Driving conditions around Granada in the south were also a little fraught due to the snow.

Parts of Catalonia, including the high ground of the provinces of Barcelona, Girona and Lleida are also on alert for snow fall.

There were also yellow level snow warnings – meaning there is less of a risk of danger for the public, in place for higher parts of Castilla-La Mancha and Castilla y Leon and Galicia.

But while other parts of the country will be spared the snow, perhaps to the disappointment of winter lovers, they can expect heavy rainfall throughout the day.

Down in the south the towns of Almeria, Cadiz and Malaga were on alert for heavy rain as well as strong coastal winds.