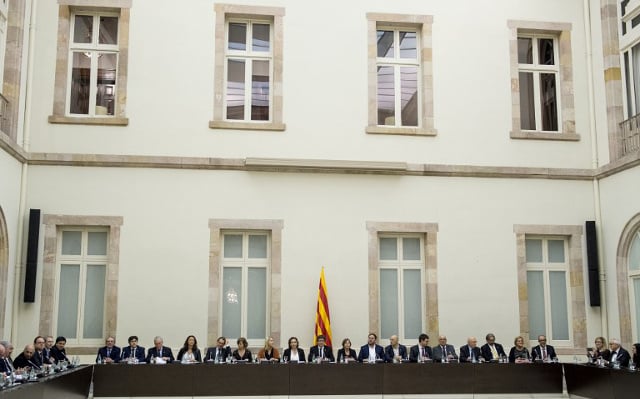 The Parliament of Catalonia. Photo: AFP

The announcement came in response to a series of conferences held since November by Santiago Vidal, an outspoken Catalan senator and staunch proponent of independence for the region.

Vidal had claimed that Catalan officials wanted to use the fiscal data to create a regional treasury, separate from the national treasury in Madrid.

“The Catalan government has, right now, all your tax data,” Vidal said at one event. “Is this legal? No, because this data is protected” by a federal data protection law.

Spain's state prosecutor, Jose Manuel Maza, has ordered Catalonia's chief prosecutor to look into the claim, which would be a “serious violation” of individual rights, his office said.

But Vidal appeared to disown his claims later on Friday, and announced that he would give up his seat in the national parliament in Madrid, saying that his statements should have been taken “figuratively” because they “did not have any basis in reality”.

Among his other claims was that the Catalan government had a secret 400 million euro ($430 million) fund to carry out an independence referendum, which Catalonia's president has pledged for September 2017.

Vidal also said the regional government had a tentative agreement with NATO to grant an independent Catalonia membership in the alliance in exchange for building a helicopter factory.

The senator admitted on Friday that he should have “better checked” the tax piracy claims, which the Catalan government “categorically denied” on Friday.

“We have no illegal data whatsoever on any citizen,” a spokeswoman for the Catalan government, Neus Munte, said Friday.