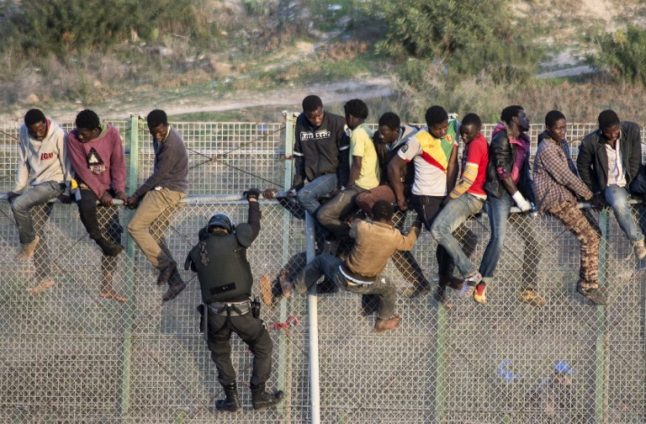 A member of the Spanish Guardia Civil climbs as would-be immigrants straddle a fence separating Morocco from Melilla on October 22, 2014, following a morning assault on the border. Photo: AFP

Where are Spain’s border fences?

The areas represent the European Union’s only land border with Africa. Each year thousands of mainly sub-Saharan Africans attempt to breach the barriers in search of a better life in Europe.

How old are the fences?

Spain started building the fences in 1998 and fortified them further in 2005. The EU has since contributed more funding for reinforcements.

Topped with barbed wire, two of the Melilla fences are six metres high, while the third is a three-metre structure. They have a combined length of 12 kilometres. The Ceuta fence is eight kilometres long and six metres high.

How effective are they?

They are generally quite effective in keeping people out, but are routinely stormed and human rights groups have accused both the Spanish and Moroccan border police of mistreating immigrants.

The fences are located on the Spanish side of the border and the country’s so-called pushback policy of walking immigrants back to the Moroccan side without affording them protections guaranteed by EU law has come in for scathing criticism.

Human rights groups have been joined by the Council of Europe’s Committee for the Prevention of Torture, the UN’s refugee agency, and the European Union’s home affairs commissioner in condemning these “hot returns”. How are Moroccan-Spanish relations in Ceuta and Melilla?

Tense. Morocco wants the regions for itself and doesn’t agree they are an integral part of Spain, which conquered Melilla in 1497.

Ceuta has a population of about 82,000, while 78,000 people live in Melilla. Spanish is the most widely spoken language. The huge security presence has seen them described variously as gated communities and open-air prisons.

Have there been any serious incidents?

Too many to count, but the deadliest events both occurred in Ceuta. In 2005 at least 14 Africans died after they were shot at by Moroccan and Spanish forces.

Then, in 2014, Spanish police allegedly fired rubber bullets and tear gas at African immigrants attempting to swim to Ceuta, killing 15 people. The regional court in Ceuta has ordered the case to be investigated further.

What do human rights groups say?

Amnesty International was furious after the 2014 Ceuta deaths:

“Spain’s Secretary of State for Security says the officers weren’t permitted to enter foreign waters. So the border stopped them from rescuing drowning men, but it did not stop the rubber bullets. At least fourteen people paid with their lives.

“What happened that day is the starkest example yet of the Spanish Government’s border policy: No entry. At any cost.”

“A policy of summary returns and reinforced controls at Spain’s land border with Morocco in its North Africa enclaves appeared to result in migrants increasingly trying to reach Ceuta and Melilla by boat or swimming. The number of deaths along that route tripled to 45 in the first six months of 2016 compared to 2015.”

The European Centre for Constitutional and Human Rights (ECCHR) said:

“Research from local and international NGOs and video footage confirm that automatic expulsions of Sub-Saharan individuals at the Melilla border fence frequently result in their severe mistreatment by Moroccan forces. This ill-treatment is both preventive and punitive and involves a very high level of violence. This is known by members of the Spanish forces and sometimes happens in plain view of them, as happened in the present case on 13 August 2014.”

“Despite these alarming reports, both the EU and Spain continue intensifying their border management externalization policy, thus escaping their obligations under the European Convention on Human Rights.”

Are there any plans to tear down the fences?
No.
Why should Donald Trump care?
If the Spanish experience is anything to go by, human rights groups will be all over him like a rash. He also risks further alienating Mexico and will have to contend with more hurdles in the form of conservationists and high costs.
But will he care? Given the personal prestige he has invested in the project, probably not.