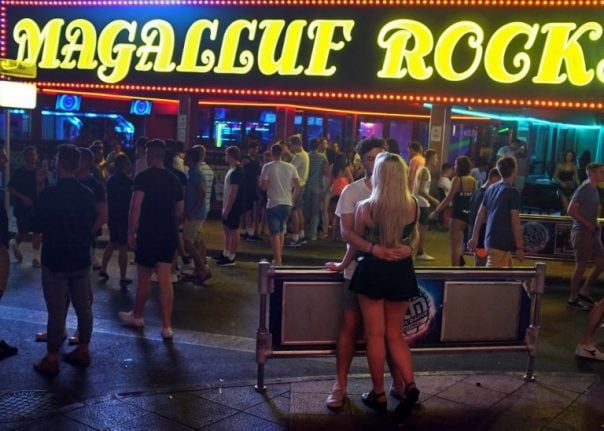 A couple kisses in front of a club of Punta Ballena street in Magaluf. Photo: AFP

They’ve packed their sun cream, bought the skimpy swimwear, shaved their extremities, and now they’re ready to tell fellow Britons on Twitter just how mangled they’re going to get in Magaluf.

But…but…what are all these American’s talking about?

Here’s what happens when Make America Great Again does battle with Magaluf, a resort that has led to more ‘alternative facts’ being relayed to spouses back home than any other place in the world. Fact.

A suggestion even emerged that Trump's misogynistic “pussy-grabbing” comments meant he would feel right at home in “Shagaluf”.

Some people say Americans are insular but so many of them are raving it up in Spain on election day#Maga#magaluf#MericansOnTour#Majorca https://t.co/OoTa7K8XZC

Does anyone ever see #MAGA and think @realDonaldTrump is just planning a banging lads holiday to Majorca? https://t.co/eCJlajiwzw

After his comments in that video, Trump going on a lads' holiday to Majorca is about right #Maga https://t.co/pknYrjBsLq

And this prescient tweeter seemed somehow even to know that Trump would reference carnage in his much-maligned inauguration speech several months later.

One American tweeter did get in on the holiday act, albeit inadvertently.

#Trump's #Inauguration Day should be a national holiday. #MAGA #GOP

OK, then. We're off to Majorca. It's gonna be amazing, believe us.