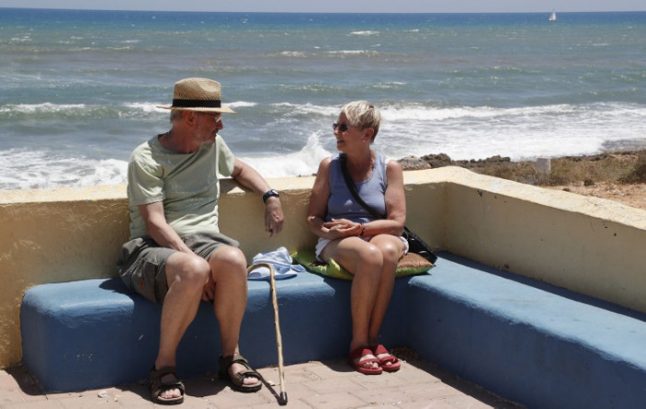 British cancer patient John Shaw, 71 was at the high court this week as judges delivered a blow to Prime Minister Theresa May’s hopes of preventing parliament having a say over triggering the divorce from the EU.

“For some of us this is a matter of life or death,” Shaw told reporters massed outside the court.

His group, which “represents the two million British citizens living in other parts of the EU,” has been heavily involved in fighting the government’s attempt to keep parliament out of the picture when it comes to triggering Article 50. “We are the human side of Brexit,” said Shaw, who lives with his wife Jill in the Lot-et-Garonne department of south west France.

“Everything people in Britain take for granted in their daily lives rests – for us – on being EU citizens. From being able to work, to accessing vital healthcare, and our children’s education.”

Shaw says healthcare is the key issue for the tens of thousands of British pensioners living throughout Europe.

“Healthcare is absolutely key. Many UK pensioners are entitled to join the healthcare systems in the countries in which they live,” he said.

“These rights would be lost. Thousands of UK expats would be unable to continue to receive the healthcare to which they are entitled.”

When it comes to healthcare, British pensioners who paid into UK system have most of their costs in France and Spain covered under the EU’s S1 scheme.

But if governments refused to maintain the scheme after Brexit then pensioners would most likely be forced to shell out for private healthcare cover or hope that governments agree to allow British nationals to join one of the state insurance schemes like PUMA in France.

“I have cancer for the third time and get treatment in France, so it is a matter of life or death,” Shaw said.

“If the S1 scheme was scrapped I would be denied access to the French system and would have to start paying for treatment myself,” Shaw tells The Local.

He also tells the story of his friend Paul, who was refused cancer treatment on the NHS because of the costs involved, but was able to move freely to France and receive the same treatment there. (A protester at the Supreme Court this week. AFP)

A parliamentary select committee in Westminster heard recently how tens of thousands of Brits abroad may have to return home to get treatment on the NHS if their health costs were not covered.

“Imagine the impact on the NHS when they all go back,” says Shaw. “It’s a disaster all round, whichever way you look at it.”

“I have been talking to many people in Spain who say they actually went out to places like Majorca because of the benefits of the sunshine and the warmth on their health conditions,” said Shaw.

But it’s not just what happens in the future that could have a negative impact on the health of “Brexpats”.

The uncertainty following last June's referendum and the impact of the falling pound against the euro has already affected people’s well-being, in some cases seriously.

“The levels of stress and worry among elderly British citizens living abroad is concerning,” Shaw says.

The France based pro-EU campaign group RIFT (Remain in France Together) that was set up since the referendum presented evidence to the select committee about the health impact of all the uncertainty.

One member of the group said: “My mental and physical health have both suffered since Brexit. I have lost weight, have some sleepless nights, lost my focus on my business and have got a script for anti-anxiety pills. I spent almost three weeks house ridden after 23rd June. I'm slowly coming around.”

Another said: “Brexit has instilled me with anxiety, gives me sleepless nights and much worry.”

To end their worry Shaw and members of numerous other expat campaign groups that have sprung up since the referendum are demanding that the British government act now to guarantee their rights and the rights of EU citizens living in the UK, before the tortuous Brexit negotiations with the EU begin.

The government must stop using us as “bargaining chips”, Shaw says.

Spanish based Briton Sue Wilson told MPs in Westminster that Britons abroad cannot be made to wait years for their rights to be guaranteed.

“People are suffering now and people have been suffering since [the referendum on] June 23rd because of fear and anxiety about what is going to happen in the future.

READ ALSO: Brits in France and Spain tell government: 'You must act now'