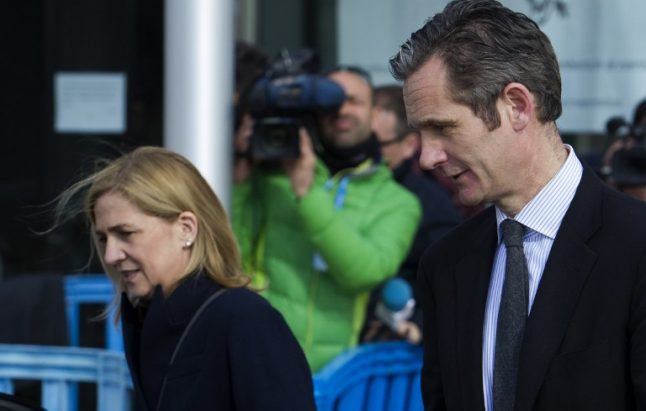 Princess Cristina and her husband Inaki Urdangarin leave the courtroom in Palma de Mallorca in February 2016 following a hearing in a landmark corruption trial. Photo: AFP
Spain shared 41st place with Brunei and Costa Rica in this year’s Corruption Perception Index (CPI), released by anti-corruption campaign group Transparency International on Wednesday.
The three countries were given a score of 58 on the 0 (highly corrupt) to 100 (very clean) scale.
Denmark and New Zealand both scored 90 to top the list, followed closely by Finland and Sweden, which scored 89 and 88 respectively.
READ MORE: Denmark once again declared world's least corrupt country

Spain scored 65 in 2012 but has dipped to between 58 and 60 in subsequent years.
Spain's King Felipe VI spoke two months ago of corruption as “a scourge that we have to defeat”. His own sister, Princess Cristina, is awaiting a verdict in one of Spain's many breathtaking corruption scandals.
As a whole, Transparency International said that no nation in the world is doing enough to fight corruption.
“There are no drastic changes in Europe and Central Asia in the Corruption Perceptions Index 2016, with only a few exceptions. However, this does not mean that the region is immune from corruption. The stagnation does not indicate that the fight against corruption has improved, but quite the opposite,” Transparency International wrote.
“Last year in Denmark, the top country on the index, 20 members of the Danish Parliament (11 percent of 179 members) did not declare their outside activities or financial interests in their asset declarations,” the group continued, adding that it is “highly alarming” that even the best-performing countries in the EU aren’t immune to corruption scandals.
Despite the small score setback, Development Minister Ulla Tørnæs said that Danes should be proud of living in a country that once again has been declared the least corrupt in the world.
For the tenth year in a row, Somalia was at the very bottom of the 176 CPI, with a score of 10. The full ranking can be seen here: