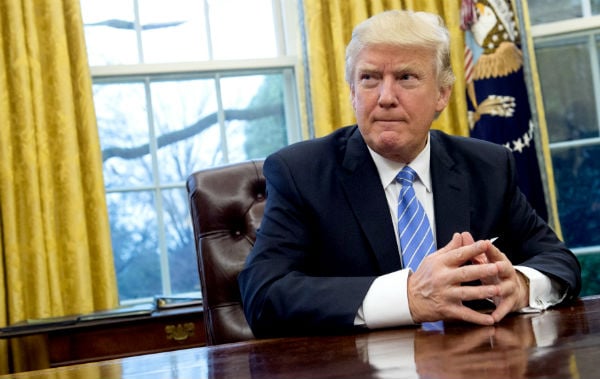 Donald Trump in the Oval office of the White House. Photo: AFP

The White House has not yet clarified whether the Spanish section of the website has been taken down temporarily to be updated, or whether US President Trump's new administration has decided to remove it altogether.

“We regret that the Spanish version of the website was deleted, it doesn't seem like a good idea,” Spanish Foreign Minister Alfonso Dastis told reporters.

“We believe it is not a good idea to give up on such a communication tool, given that this is a country with 52 million Spanish speakers.”

According to the US Census Bureau, the Hispanic population has actually now reached close to 57 million — the largest minority living in the 320-million-strong country.

Many are from Latin America, and around 13 million are thought to have voted in the November election — a majority for Trump's Democratic Party rival Hillary Clinton.

Spain's government spokesman Iñigo Mendez de Vigo said “the knowledge and use of different languages in society contributes to propping up a country and demonstrates the cultural wealth of a nation.”

In a statement, he added that Spanish had “helped bring together the multicultural North American society for centuries.”

But he said the website's sudden disappearance would “not stop or put at risk the unstoppable spread of our language in the United States and in the entire world.”

Trump has offended many Latinos with his harsh rhetoric and tough stance on immigration.

These included proposing to deport millions of undocumented migrants in the country, the bulk of whom are from Latin America, and building a wall on the US border with Mexico.

In September 2015 while still competing for the Republican Party's presidential nomination, Trump famously told his Spanish-speaking rival Jeb Bush “he should really set the example by speaking English while in the United States,” in an interview with conservative website Breitbart News.

Bush broke into Spanish on several occasions on the campaign trail. And for the first time since 1989, Trump's cabinet will feature no Hispanics.