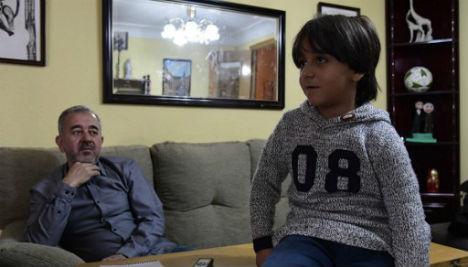 Osamah Alabed Almohsen with his son Zeid. Photo: Javier Soriano/AFP
His poor Spanish has meant Osamah Alabed Almohsen, who was a first division football coach in Syria, has been suspended from his job with a football school. And he is now considering leaving Spain.
Camerawoman Petra Laszlo sparked global outrage after television footage in September 2015 showed her tripping up a man — later identified as Almohsen — sprinting with a child in his arms, and kicking another running child near the Hungarian border with Serbia.
A Hungarian court last week sentenced her to three years' probation for disorderly conduct. The judge rejected her lawyer's argument that she was merely trying to protect herself.
Almohsen declined to discuss the incident in an interview with AFP except to say he has “forgotten” Laszlo, who said she has been subjected to a “hate campaign” since the footage emerged.
“I need to look out for the future of me and my family, I don't have time to think about this journalist,” he said in halting Spanish in the living room of his two-bedroom flat in Getafe, a city on the outskirts of Madrid.
“I feel sad, but hopeful,” the bearded and grey-haired 52-year-old said. “I have three of my sons with me but the youngest needs his mother,” said Almohsen in a reference to nine-year-old Zeid, whom he was carrying when he
was tripped.
He arrived in Spain later that month with Zeid and his 17-year-old son Mohamed. His oldest son Almohanned, 19, joined him at the end of 2016. But his wife and 15-year-old daughter remain in Turkey, where the family
fled in 2012 to escape Syria's civil war. They have a visa to enter Spain but still have not received the green light from Turkish authorities to leave, Almohsen said.
Zeid, who comes to sit beside his father on the sofa when he hears his name mentioned, said he talks on the telephone with his mother almost every day.
Speaking in perfect Spanish, the lively boy said he likes to meet his new friend Alex, a neighbour, to play hide-and-seek or cops and robbers at the building's patio.
He shows with pride an album with photos of his meeting with his hero, Real Madrid football superstar Cristiano Ronaldo, shortly after he arrived in Spain and a football signed by the squad's players.
Zeid accompanied Ronaldo when Real Madrid entered the pitch before the kickoff of a match and received applause from the crowd.
When the director of a Spanish academy dedicated to training football coaches, Cenafe, saw the video of his father being tripped up, it offered to hire Almohsen — who was formerly manager of Syrian first division side, Al-Fotuwa.
But Almohsen speaks little English and has struggled to learn Spanish, which led Cenafe to decide in September to not renew his contract. The academy is still paying the rent on his apartment though.
“We are not going to leave him on the street,” said Cenafe director Miguel Angel Galan.
If his Spanish improves, the door is open for Almohsen to return to Cenafe, he said.
“I think he has not formed relationships with Spanish people” and spends most of his time with Arab speakers, said Galan.
Almohsen — who speaks German in addition to Arabic — says he is taking Spanish lessons, although he is considering moving again to another European country like Germany or the Netherlands.
“If I can't get a job, I will have to go to another country, and with my family together it will be easier,” he said.
He wants to keep sending money to his 84-year-old mother in Damascus, whom he speaks to whenever he can.
But he said he has lost touch with his friends in his hometown of Deir Ezzor, a besieged Syrian government enclave. He hopes to continue working in football, his passion.
“He always comes by, not just to watch Real Madrid play,” said Jose Manuel, in charge of the bar in Getafe where Almohsen usually goes to watch football matches, often with Zeid.
Url copied to clipboard!