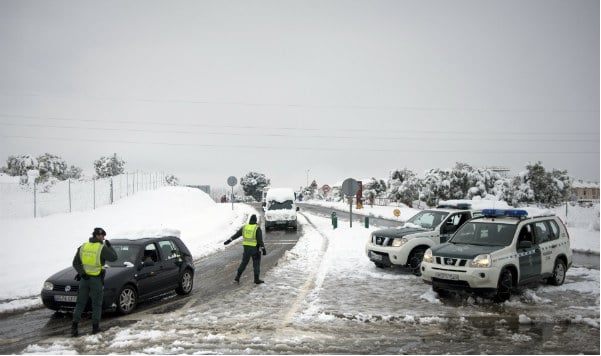 The Civil Guard reported that around 500 people were forced to spend Thursday night in their cars on the A-3 in the province of Cuenca after becoming trapped in a snowstorm.

The DGT road authorities also reported that 14 roads in the Alicante region, including the A-31 in Villena are impassable and six roads in Castellón including the A-23 and n-232 are blocked. They advised drivers to visit their website to check the state of the roads before starting a journey.

The State Meteorological Agency AEMET has issued red weather warnings across Castellón and Valencia as the bad weather continues through Friday.

Amber alerts have been put in place across Teruel, Cuenca, Albacete, Murcia and Almeria as stormy weather and freezing temperatures bring snow, fierce wind and high seas to the  southeast of Spain.

Spain sent its Emergency Military Unit to the worst affected areas to distribute blankets and provisions to those trapped in vehicles overnight.

The government has issued warnings urging people to stay off the roads in the snow-hit areas.

“The situation caused by this cold front is exceptional,” Iñigo de la Serna, Spain’s Public Works Minister told Cadena Ser on Friday morning.  “It has caused very complicated situations on the roads and is not expected to improve in the coming hours.”

The temperatures plummeted to -12C overnight in some areas.