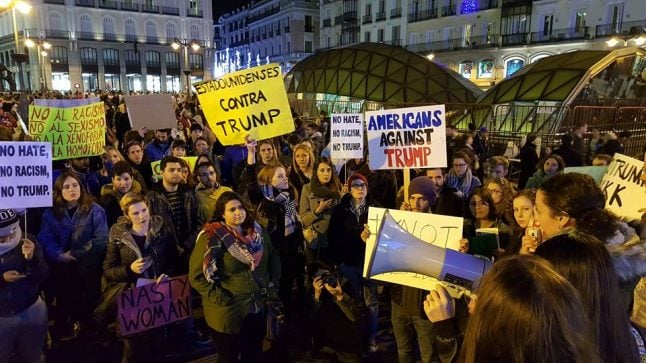 At 6pm on Friday, just as the inauguration gets underway in Washington DC,  hundreds will gather in Madrid to stage the first of a series of protests.

The Madrid event has been organised by a group of Americans living in the Spanish capital whose protest group formed “organically” in the aftermath of Trump’s shock victory.

“The day after the election in November, we all came together organically,” one of the organisers, Pennsylvania-born Jenna Schlosbon, told The Local. “Basically, I woke up to the result shocked, depressed, afraid, feeling helpless. I went on Facebook to a few of the expat/English teacher groups I’m in and saw a lot of other Americans were feeling the same way.”

Recognising each other’s despair, a meeting was arranged and from there the protest group “Madrid Resistance” was formed.

Dozens turned up to a demonstration in Madrid’s Puerta del Sol on December 2nd and not just Americans “but people from all over, Spaniards, other Europeans, people from Latin America”.

But tomorrow’s event will be on a far grander scale. The group has permission from the council to hold a march starting from the Teatro Real at Opera at 6pm and ending two hours later in Puerta del Sol where speeches will be made.

There will also be an “open mic” where people can come up and have a few minutes to express themselves about how a Trump presidency affects them.

“We are marching to make a statement; to tell Madrileños, Spaniards, Europe, as well as our fellow Americans that we are against the hateful rhetoric, policies, and cabinet choices of Trump as they do not reflect our values of a progressive, inclusive, open-minded, and diverse USA,” explained 30-year-old Schlosbon, who moved to Madrid two-and-a-half-years ago to teach English.

“We refuse to normalize the platform of the President elect. This has not been a normal election. We feel our country is in real danger,” she said.

Friday's march is part of of a global movement of more than 60 ‘sister’ marches being held around the world in solidarity, with the largest expected to be the Women’s March in Washington DC on Saturday.
Another demonstration is being held on Saturday at noon outside the American Embassy in Madrid, organized by the Spanish Student Union.

“We from the Spanish Students Union (Sindicato de Estudiantes) are campaigning against Trump's agenda too, in solidarity with our American mates Socialist Students and all the American people that will suffer Trump's politics,” said Ibai Asensio Pol, a physics undergraduate at Madrid's Complutense University.