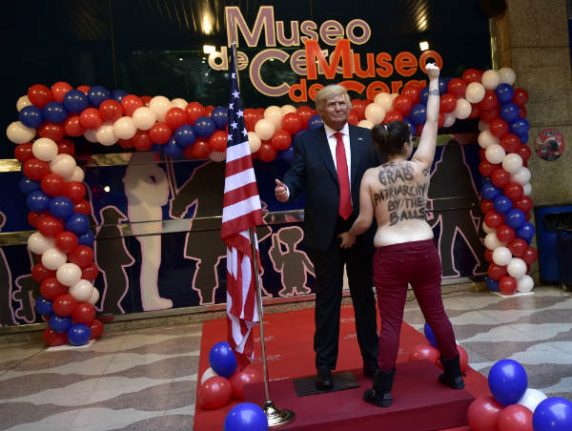 On a stage in front of the museum surrounded by red, white and blue balloons, the effigy of the President-elect topped by trademark bouffant was presented to the Madrid public at 10.30am on Tuesday.

Despite the chilly temperature, Donald’s doppleganger was confronted by a topless woman with the words “GRAB BACK” written across her bare breasts.

On her back was the slogan “Grab patriarchy by the balls”.

She shouted repeatedly “grab him by the balls” as she approached the waxwork statue and appeared to give them a squeeze.

A man, thought to be the musuem's director of communication Gonzalo Presa, attempted to cover her up with the nearest thing to hand – a bunch of ballons.

The female protester belonged to the feminist group Femen, known for their demonstrations that involve topless women with messages scrawled across their bodies.

The words she chose to “wear” are a reference to the now-infamous “Access Hollywood” recording of Trump boasting to Bill Bush that his celebrity status allows him to grab women “by the pussy” whenever he pleases.

A women’s march is planned for Madrid on Saturday, the day after the inaugeration in Washington.