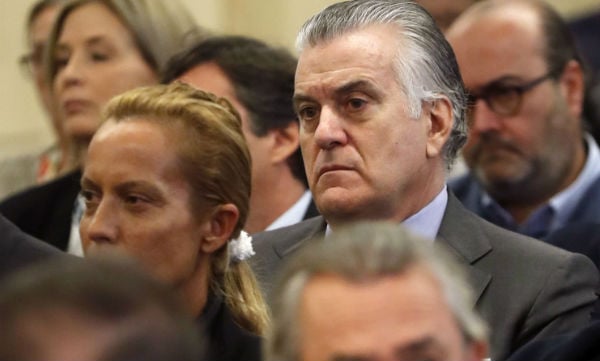 Luis Barcenas, who was party manager from 1990 to 2008 and then treasurer for a year, is on trial with 36 other defendants in the so-called Gurtel affair.

The trial centres on a vast corruption network that allegedly saw companies shower PP lawmakers and civil servants with bribes in exchange for public contracts.

Companies would give Francisco Correa, a businessman also on trial, a commission of two to three percent on the value of contracts, according to a confession published by Correa in online daily eldiario.es.

He would then allegedly give this to Barcenas after taking his share.

Some of the money also went into a party slush fund, according to the report. The fund is an ingredient of the current trial but not the focus, as as a separate trial on it is pending.

Barcenas was nevertheless questioned on the subject on Monday, and acknowledged there existed secret accounts in the PP, pointing to “financial resources that did not appear in official book-keeping.”

The former treasurer had already said there existed such secret accounting in 2013 when questioned by a judge behind closed doors, but this is the first time he has said this in public.

But he said that rather than bribes, businessmen gave donations “generously” without expecting anything in return.

“I never received anything from Correa, not for me nor for the PP,” he added, blasting the businessman's allegations as “nonsense.”

When questioned by the judge in 2013, Barcenas had also claimed he had given Prime Minister Mariano Rajoy envelopes of cash.

But on Monday, he defended Rajoy, saying he had given orders not to use Correa's companies anymore in 2003, “because he was told that Correa was engaged in illegal activities.”

Barcenas, who is also accused of stashing up to €48 million ($51 million) away in Swiss bank accounts, faces 42 years in prison for corruption and tax fraud.