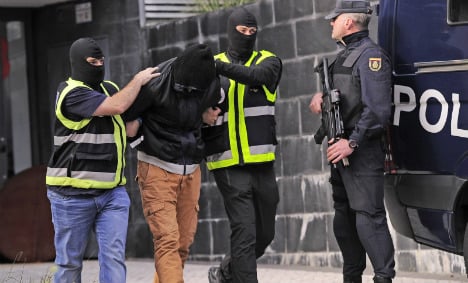 Archive photo of the arrest of a suspected jihadist. Photo: AFP

The man, who held Spanish residency, was detained in the northern city of San Sebastian and was said to be working on recruiting potential combatants in person and over the internet since 2010.

“The accused was very active in finding new recruits and would approach young people at risk of social exclusion, easily influenced and emotionally unstable, and make the most of his position as a boxing coach to win their confidence,” the ministry said.

The cell specialised in “sending foreign fighters to Turkey where they received instructions from Daesh to commit attacks in Europe”, the interior ministry said in a statement, using the Arabic acronym for Isis.

It added that two other members of the cell had been arrested in November in Morocco and France after travelling to Turkey and back.

These two men followed “concrete and precise instructions from Daesh”, the ministry said.

According to Spanish authorities, 181 alleged jihadists have been detained since 2015, when Spain increased its terror alert to category four on a five-point scale.

The country has been mentioned on extremist websites as a possible attack target for historical reasons, given Muslims ruled in Spain for close to eight centuries until 1492.

But it has been spared any incident since March 2004, when bombs exploded on commuter trains in Madrid, leaving 191 dead in attacks claimed by Al-Qaeda inspired militants.