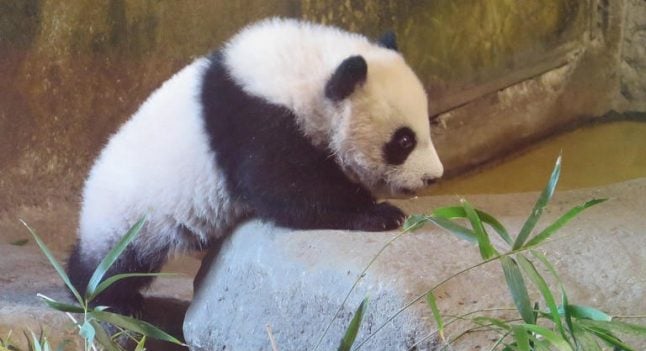 Chulina proves she is cute by name and cute by nature. Photo: Photo: Zoo Aquarium Madrid

The name, which means Cutie in English, pays homage to Chulin, the first panda born in captivity in Europe, at Madrid’s zoo, 34 years ago.

Like her namesake, Chulina is a  pioneer, as she was the first female cub born in captivity in Madrid when she arrived weighing a mere 180 grams in August.

The name also refers to bamboo, which form panda’s staple diet, in Chinese.

Notoriously difficult to breed in capitivity, Chulina was conceived naturally at the Spanish zoo by two adult pandas on loan from China since 2007.

At a ceremony to present Chulina in public on Thursday, China's ambassador to Spain, Lv Fan, said she was the fruit of both countries' friendship and research into pandas.

The giant panda was considered to be in danger of extinction but there are now 1,864 pandas in their natural habitat in China.

It was downgraded from “endangered” to “vulnerable” last September on the International Union for Conservation of Nature (IUCN) Red List.The giant panda is no longer an endangered species, following decades of work by conservationists to save it.