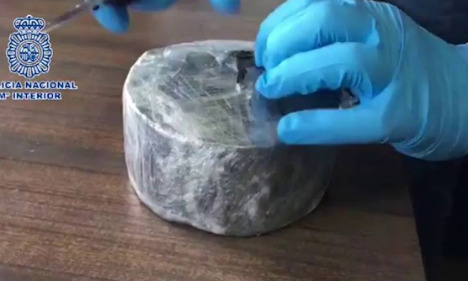 A kilo of cocaine was hidden inside the cheese. Photo: Policia Nacional

The 35-year-old was stopped after police observed him “behaving suspiciously” when he a police patrol car in the street.

He was clutching what appeared to be a wheel of cheese wrapped in cellophane but when officers sliced into it they discovered the inside of the queso was packed with almost a kilo of cocaine.

Drug traffickers have become ever more inventive in transporting cocaine, which shipments discovered disguised as shoes, wooden furniture and even plaster casts used on a mule's fake broken leg.

In a statement the police said it was the first time that they had seen cocaine hidden inside a cheese.

Well, they do say that cheese is addictive.