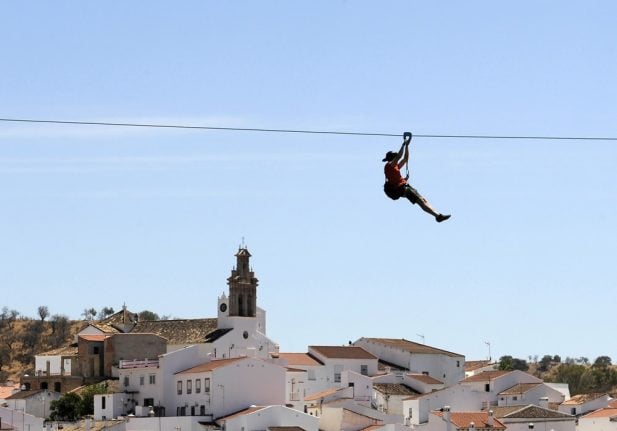 LimiteZero Zip Line is based in Sanlúcar de Guadiana. Spain’s most terrifying mountain path re-opened to the public in 2015 after being closed following a series of deaths in 1999 and 2000. It may now boast more safety features but the path, snaking along the side of a gorge in El Chorro in Malaga, is still not one for the faint hearted! The Sierra de Guara in the Pyrenees in Aragon offers some of the most exciting canyoning in Europe. Adventure tour organizers offer trips ranging from fun for all the family to the more extreme routes suitable for experts only. Technical jumps, long slides and big drops with waterfalls of up to 60 meters can be found in the Monte Perdido National Park while the Gorgas Negras is known for its great length and outstanding beauty. A hillside village in one of Spain's forgotten corners opened what it claims to be the longest zip wire ride in Europe last summer.

Fuentespalda, in the inland southern province of Teruel, Aragon, one of the most sparsely populated areas of Spain has become a buzzword for adrenalin seeking adventurers.

The ride promises thrill seekers the buzz of flying through the air for almost 2km (well, 1,980meter to be exact) in a harness 800 meters above sea level providing a birds eye view of the Gúdar mountain range.

READ MORE: Twelve epic festivals in Spain to attend in 2020