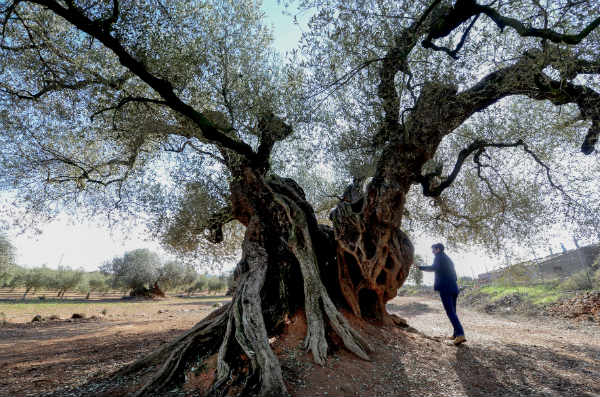 Once dug up and sold as luxury items for the wealthy, they are increasingly protected as farmers and authorities realise these trees, some of which were planted by the Romans, are an invaluable part of Spain's heritage.

Near the town of Traiguera, Amador Peset, 37, gets out of his old 4×4 and, in the biting wind, cuts across a field before stopping before a majestic tree.

“You're probably in front of the biggest olive tree in the world… with a girth of 10.2 metres (33.5 feet),” the farmer says proudly.

Botanists say a circumference of 10 metres indicates a tree is over a thousand years old – which means this specimen was around when the area was still under Muslim rule.

Peset lovingly tends 106 such “monuments”, cleaning their gnarled branches and ridding them of weeds that suck their sap like vampires.

Joan Porta, another farmer, says that just a few years back, olive trees were largely ignored in fields also full of almond and other fruit trees, vines or wheat.

In fact, they were often used for firewood in farms.

“Now we realise that they are thousand-year-old trees,” the 75-year-old says, pointing to the jewel in his own field's crown. It is aged 1,702 years according to a dating method used by the Polytechnic University of Madrid – which means it was planted under the Roman emperor Constantine.

Brought to Spain by the Greeks and the Romans, olive trees now cover 2.5 million hectares (6.2 million acres) of land.

Such is the attraction of these long-living trees that they have become a must-have luxury item for some wealthy people.

In the mid 2000s, “people would talk uneasily about how some trees were torn out, how they would see trucks loaded up” with large trunks, says Maria Teresa Adell.

Adell manages an association of 27 towns and cities in the Valencia region – including Traiguera – as well as the neighbouring areas of Catalonia and Aragon, which, among other things, works towards protecting their olive tree heritage.

According to the group, hundreds of the ancient trees were ripped out during the 2000s and taken away to be sold for high prices in garden centres or specialised auctions.

Online foreign garden centres still offer “ancient” olive trees for sale, such as Todd's Botanics in Britain, where one specimen from Valencia is priced at €3,500 ($4,300, €4,100).

“I buy one or two every year,” says owner Mark Macdonald, adding however that he only purchases trees already in ready-to-plant clods.

As for those who buy them, they tend to have money — people such as French wine magnate Bernard Magrez, who told AFP he had planted olive trees in the grounds of several of his Bordeaux estates including the prestigious Chateau Pape Clement, aged “between 1,015 and 1,860 years”. The millennia old olive tree, famous for “staring” in the film “The Olive” by Spanish director Iciar Bollain , in an olive grove in the municipality of Uldecona. Photo: Jose Jordan / AFP

For César-Javier Palacios, spokesman for the Felix Rodriguez de la Fuente environmental foundation, taking them away from their native soil “is like taking a cathedral and putting it somewhere else.”

Not so, argues Roamhy Machoir-Heras, who organised a big ancient olive tree auction in 2011 where Magrez bought his specimens.

Hers were already in clods, and “we saved them,” she said.

Those that didn't go to Magrez's estates went to a “sumptuous collection” in the Middle East, she added.

Palacios, though, has launched a petition “against the plundering of old olive trees” on Change.org that has garnered 154,000 signatures so far.

“We are asking… for regulations banning the traffic, like for ivory,” he said, adding however that the trade in olive trees has started to slow as people realise these are “heritage treasures”.

Concepcion Muñoz, an agronomist at the University of Cordoba, has counted 260 different varieties in Spain, of which there sometimes only remains one specimen.

In 2006, the Valencia region banned the practice of tearing out trees with a girth of more than six metres.

Various towns and cities in Valencia, Catalonia and Aragon have also inventoried nearly 5,000 of the oldest trees with a view to protecting them.

This makes it the region with the “highest concentration of ancient olive trees in the world,” says Adell, even if there are also many in Italy and Greece.

And to persuade farmers, Adell's grouping of municipalities has also found an economic argument – producing oil from trees that are on the official inventory and are thus protected.

Peset, for one, is sold on the idea.

He is negotiating with Chinese buyers interested in ordering a thousand bottles to use in cosmetics.