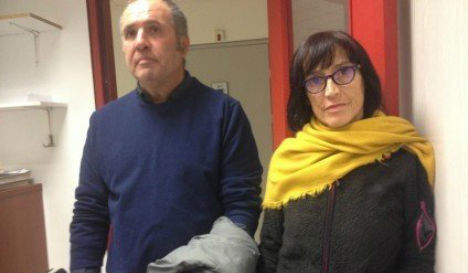 Mikel Zuloaga and Begoña Huarte will appear in court on Friday. Photo: Change.org

Mikel Zuloaga and Begoña Huarte, of the Ongi etorri Errefuxiatuak (Refugees Welcome) platform, were stopped at Igoumenitsa harbour in northwestern Greece as they were about to board a ferry to Italy.

Faced with what they say is government inaction on migrants and refugees, they tried to bring the eight youngsters back to Spain, said Andoni Louzao, another member of the pressure group.

“They were driving a camper van with eight people from Pakistan, Syria, Iraq, Afghanistan and Iran hidden inside,” a Greek coastguard source told AFP.

“They are currently held at the Igoumenitsa coastguard office and will appear before a prosecutor on Friday.”

A petition on change.org has been launched calling for their release.

Greece says it has over 60,000 mainly Syrian refugees and migrants trapped on its soil, after Balkan and EU countries further north shut their borders last year.

Spain has been criticised for the low number of refugees it has taken in, though on Wednesday close to 200 arrived from Greece, the interior ministry said, taking the total number to 898, according to official figures.