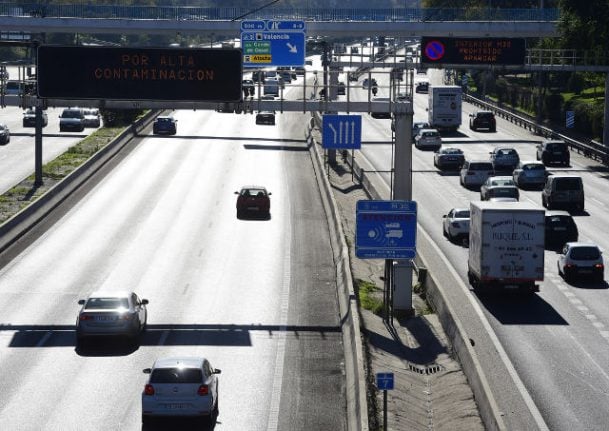 Pollution levels in the Spanish capital have been high in December. Photo: Javier Soriano/AFP

In other words, only vehicles with a registration number ending in an odd number will be allowed to drive within the specified limit on Thursday, December 29th, and only those with an even number on Friday, December 30th, with the pattern continuing until the restrictions are lifted.

The restrictions apply between 06:30 and 21:00. There are a number of exemptions however: ‘Zero emission’ vehicles, hybrids, motorized scooters, vehicles for those with a disability, cars with a high occupancy (classified as three or more occupants), and public transport will not be covered by the ban. A full list of exemptions is available in Spanish here.

A maximum speed limit of 70 km/h on the city’s main roads introduced earlier this week remains in place, as does a parking ban in areas covered by SER parking meters.

The measures will be in place until the contamination reduces, but calm weather in the city has not helped the cause.

If the nitrogen dioxide levels reach 400 micrograms, the City of Madrid could activate phase four of its anti-pollution measures, which includes reducing traffic on the M-30 by 50 percent and banning taxis from driving in the city centre.