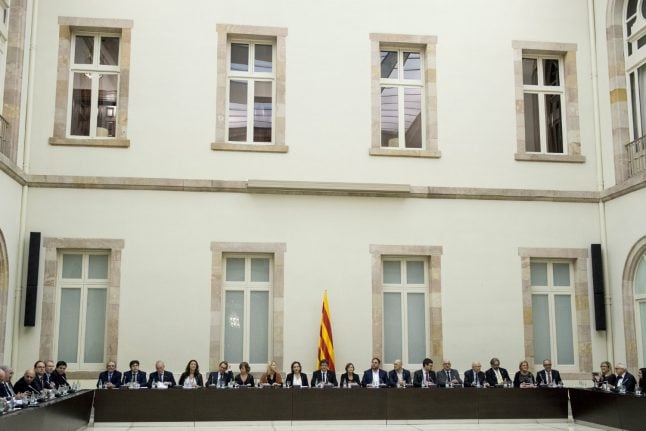 President of the Catalan Government Carles Puigdemont and political parties pose before a meeting at the Parliament of Catalonia in Barcelona. Photo: Josep Lago/AFP
The goal of the meeting, which brought together Catalan unions, separatist parties and businesses at the regional assembly, is to draw up a “national pact” for the vote in the wealthy northeastern region.
Catalan President Carles Puigdemont is seeking to rally independence supporters following recent divisions amongst separatist parties, which won a majority in the regional assembly for the first time in September 2015.
“We have to stand together and we can't mistake who our adversary is,” Marta Pascal, general coordinator of Puigdemont's PDC party, told AFP.
The meeting comes amid a thaw in relations between Catalonia and Spain's central government.
Prime Minister Mariano Rajoy's conservative Popular Party (PP) government has been more open to dialogue with Catalan separatists since it was sworn in for a second term last month.
He has assigned the task of handling the Catalonia issue to Deputy Prime Minister Soraya Saenz de Santamaria who has set up an office in Barcelona, the Catalan capital, which she visits almost weekly.
“There has been a change in strategy on the part of the government to try to correct the separatist drift and reduce tensions,” conservative daily ABC wrote Friday.
Santamaria has offered to negotiate with a list of economic and social demands made by Puigdemont but has refused to discuss the planned independence referendum, which her government deems illegal.
She has also acknowledged that her party made mistakes in its campaign against a 2006 statute that granted increased powers to Catalonia.
Spain's Constitutional Court in 2010 struck down several articles of the statute, despite the fact that it had been approved by Catalans in a referendum – as well as by the Spanish parliament.
Her comments sparked a harsh response from the more conservative wing of the PP.
“The government has arrived late at dialogue, they have to hurry up and produce facts and not just words or else this will lead nowhere,” said Miquel Iceta, head of the Socialists' Catalan faction.
While the government has taken a less rigid stance on Catalonia, it has used the courts to block all steps taken by the Catalan government towards independence.
It has also taken legal action against Catalan politicians who have pursued independence.
A Barcelona court announced Friday that Puigdemont's predecessor Artur Mas will stand trial in February for serious disobedience over his role in staging a symbolic independence referendum in 2014 – despite it having been suspended by Spain's Constitutional Court.
“It is hard to believe that there is a will to talk when at the same time we have these legal cases,” said Pascal.
The central government's spokesman Inigo Mendez de Vigo urged Catalan leaders “not to be carried away by the radicals”.
“There will be no referendum on self-determination in Spain because this goes against the constitution,” he told a news conference hours before the summit started in Barcelona.
The Catalan government wants to win approval from Spain's central government to hold an independence referendum.
It cites Britain's approval of the referendum held in Scotland in 2014 which resulted in a “no” vote as an example.
But Pascal said Catalonia will go ahead with the vote even without the green light from Madrid “with our own resources”.
Under Spanish law, regional governments cannot organise a referendum, only the central government can.
The Catalan government lacks its own electoral commission and does not have a list of eligible voters to be able to stage a referendum but Pascal said it has a plan to get around these obstacles.
“We can't explain how because we can't show our cards. We have to be rogue and shrewd,” she said.
Polls show Catalans overwhelmingly support the right for an independence a referendum but are evenly divided on actual secession.