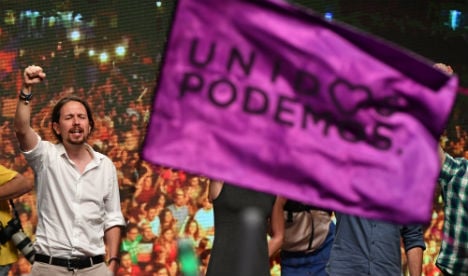 However, this has created challenges for the party itself. Initially formulated as an assault against the establishment, Podemos is now part of the political system that it set out to fight.

Podemos does not refer to itself as populist, but by Ernesto Laclau’s standards the party is, or at least used to be. Laclau developed a theory of populism with three simple, if highly abstract, components: a chain of equivalence, an empty signifier and an antagonistic frontier. Imagine a country in crisis. Unemployment is high, youth unemployment even higher, and the middle class is squeezed. The financial and economic institutions have lost their legitimacy, and so have the legal and political institutions.

In this country, old and new demands can no longer be channelled through the usual institutions. A big part of the population no longer feels represented. Society has been dislocated, with the different demands left floating around.

This sort of situation is ripe for populist intervention. What populist discourse does, according to Laclau, is connect different demands together in a chain of equivalence. Those demands – cheaper housing, get rid of corrupt politicians, and so on – become equivalent because they are represented by the same empty signifier.

An empty signifier could be a populist leader – say, Pablo Iglesias, the leader of Podemos – or it could be a slogan – for instance, “enough is enough”. From the perspective of the different demands, the signifier becomes the solution to every one of them: if Podemos comes to power, they’ll stop the eviction of people from their homes, corrupt politicians will be a thing of the past etc. In 2013, thousands demonstrated in Madrid against corruption in government. Photo: AFP

The empty signifier has to be understood in tandem with the third element of Laclau’s theory of populism: antagonism. Populist discourse divides society in two: those below and those above. This is precisely what Podemos did from the beginning: those below (the people – la gente) were pitted against those above (the establishment – la casta).

Iglesias recently said that Podemos must decide whether to continue being populist or not. After the December 2015 general elections, the question became urgent.

Since then, Spanish politics has been in a stalemate: the conservative Partido Popular (PP) lacked the numbers to form a majority government, and the centre-left Spanish Socialist Workers’ Party (PSOE) and Podemos were unable to reach any agreement on forming an alternative government.

In aiming to overtake PSOE to become the second-largest party in Spain, Podemos has portrayed PSOE as part of the establishment. But the electoral reality is that Podemos remain smaller than PSOE. Podemos can only oust PP from power by entering into an alliance with PSOE. Chantal Mouffe uses the term “agonism” to characterise a form of democracy where antagonism is not suppressed, but rather translated into agonistic struggles between agonistic adversaries. The latter disagree, but they agree to respect one another’s right to be part of the political space.

Some members of Podemos – including Íñigo Errejón, the party’s number two – believe that Podemos must think of itself as engaged in agonistic struggles within and outside the political system. Others, like Iglesias, lean towards a more antagonistic attitude.

Hence, it is not just a matter of how Podemos acts towards PSOE, but of how the party relates to the whole political system, which it is now part of. Podemos has been divided over these questions since spring, and the divide is personified in Pablo Iglesias and Íñigo Errejón. It extends to the symbols they use: Iglesias uses a raised fist, Errejón a V sign. Although there may be subtle ideological divisions, the divide is first and foremost a strategic one.

This became apparent when Podemos formed an electoral alliance with Izquierda Unida (United Left) during the re-run of the general elections in June this year. The thinking was that, by uniting the two parties, the new list – called Unidos Podemos – would pick up more seats because the electoral system is biased against smaller parties.

The result, however, was that many of Podemos’ and Izquierda Unida’s voters either stayed at home or went elsewhere.

Introducing the new opposition between below and above allowed Podemos to position itself as representative of those below and of the new, thereby appealing to voters across the political spectrum. This transversality, or the ability to introduce new signifiers into the political and social space, was supposed to realign forces and pave the way for a new majority – and a new hegemony.

Instead, the alliance with Izquierda Unida placed Podemos even more firmly on the left of the old political spectrum. Indeed, it robbed Podemos of some of its transversal force.

Even though Errejón self-identifies as someone of the left, he pushed transversality the most, arguing that it was necessary to create a new majority. But in an interesting twist to this debate, Mouffe argues – against Errejón – that Podemos ought not to shed itself of the “left” label. The “left” is connected to equality and social justice, and this is what distinguishes left-wing from right-wing populism.

In short, it is not enough to speak in the name of the people – Marine le Pen does that too. Íñigo Errejón believes that Podemos must broaden its appeal to capture a larger portion of the electorate – not just those on the left. Photo: Ministerio de Cultura de la Nación Argentina/flickr

The other parties, along with the mainstream media, have tried to break the antagonism that Podemos articulates between the people and the establishment. Open shirts have even become fashionable among PSOE members who now understand that they have to look less like men and women in suits and more like ordinary people. Other parties in Spain have drawn comparisons between the fist-raising Pablo Iglesias and Hugo Chavez to damage Podemos’ brand. EPA/AAP

At the same time, PSOE (which has most to fear from Podemos) has been quick to cast a dark cloud over what it characterises as Podemos’ populism (a word with very negative connotations in Spanish society) by associating this with Chavismo in Venezuela. Right-wing politicians and media outlets did the same, branding Podemos as just another political elite interested in power.

All of this compromised Podemos’s transversal appeal. By rebranding Podemos as a threat to ordinary Spanish people (not unlike the old communist threat), PSOE and the right pushed Podemos closer to the establishment and further away from the people.

In doing so, PSOE and the right are trying to blur the antagonistic frontier and break the chain of equivalence established by Podemos. This is precisely what hegemony á la Laclau and Mouffe is about: the creation of new meanings and new chains of equivalence.

What does the future hold for Podemos?

Given all of the drawing, redrawing and blurring of boundaries from all sides of politics, Podemos faces major challenges over the next couple of years.

Should the party opt for a more transversal strategy, or present itself as a party of the left? How can Podemos maximise support: go for a thin slice of the whole electorate, or a big slice of the left?

These challenges are more like tensions than anything that can be wholly overcome. Podemos will have to negotiate them carefully, fully aware that, whatever it does, it can’t have it all.

This article is part of the Democracy Futures series, a joint global initiative with the Sydney Democracy Network. The project aims to stimulate fresh thinking about the many challenges facing democracies in the 21st century.