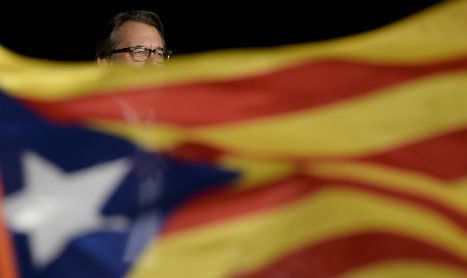 Prosecutors accuse Mas of serious disobedience for organising the non-binding plebiscite on November 9th, 2014 despite it having been suspended by Spain's Constitutional court.

Catalonia's Superior Court of Justice said Mas, who governed the wealthy northeastern region between the end of 2010 and start of 2016, will go on trial February 6-10th.

Two members of his former government will also be tried as accomplices – Catalonia's former vice president Joana Ortega, and its former education minister Irene Rigau who allowed public schools to host ballot stations for the referendum.

“We are going to trial with our head held high and with the sense of duty fulfilled,” Mas wrote on his Facebook page.

Mas and his two former associates face a 10-year ban on holding public office if convicted.

Over 80 percent cast their ballot in favour of independence in the referendum – although just 2.3 million people out of a total of 6.3 million eligible voters in Catalonia took part.

The court announced Mas' trial date just hours before his successor Carles Puigdemont will hold a summit in Barcelona of civil society representatives to prepare an independence referendum he plans to hold in September.

Puigdemont has vowed to go ahead with the vote with or without the support of Spain's central government, which fiercely opposes it.