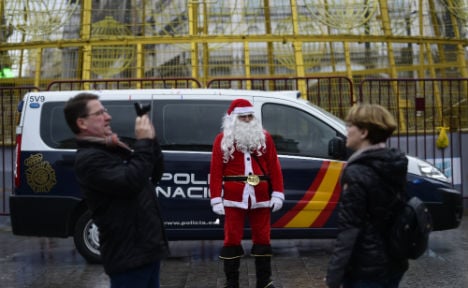 Spain’s Commissioner for Public Security has recommended that “physica the protection measures are installed” in public places where large crowds gather.

The measures will be taken in  a bid to prevent the sort of terrorist attack that occurred at a Christmas market in Berlin on Monday evening, when a truck ploughed through the crowds killing 12 people and injuring almost 50 others.

“Bollards, large planters, or even patrol cars should be placed at the entrance to public places to prevent access to unauthorised vehicles,” recommended a letter sent to councils across Spain by the General Security Commissioner on Tuesday.

“Extreme vigilance” was called for on the “prominent dates” of Christmas, New Year’s Eve and on the evening of January 5th when many towns stage ‘Three Kings’ parades.

The Interior Ministry also announced on Tuesday that it will boost police presence at potential trouble spots during the festive period but insisted that it would not be raising the nation’s terror threat alert.

Spain has been on level 4, out of a possible 5, since June 2015, the highest since the Madrid train bombings in 2006, after a shooting attack at the beach resort of Sousse in Tunisia left 38 people dead.

Isis claimed responsibility for the  Berlin attack, saying that the perpetrator followed their call for adherents to attack the countries which are fighting against them in the Middle East.