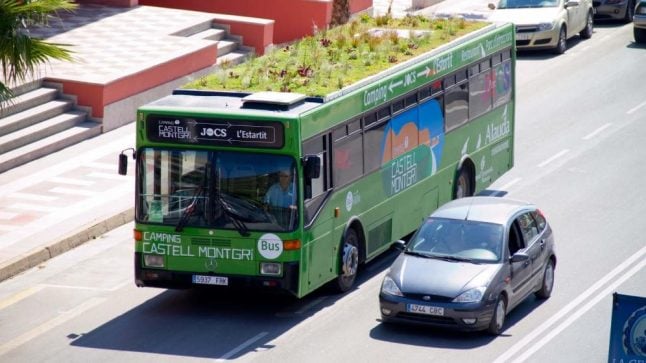 Madrid has unveiled a plan for gardens on the rooftops of its buses. Photo: PhytoKinetic

The unusual plan to tackle pollution and reduce C02 emissions will see portable gardens planted on the top of buses and bus stops across the city. Each garden will cost around €2,500 – less for the bus stops – and will involve special irrigation systems to avoid leakage.

“Each garden will be formed of metallic meshes and sustainable materials that can withstand movement and not leak water,” explained project manager José Antonio Antona.

“The idea is for them to soak up noise, heat and pollution,” he added.

“Muévete en verde” was chosen as one of six innovative projects to improve the city from 800 entries and will start with a pilot project on the number 27 and  34 bus routes.

“These routes crisscross the busiest zones of the city from north to south and saw 17 million people use them this last year,” said the organisers unveiling the project on Monday.

Manuela Carmena, the left-wing mayor elected in May 2015, said she was absolutely behind the plan.

It is the latest in a series of measures introduced by the new administration to boost the city’s environmental policies. Earlier this month City Hall imposed restrictions on traffic on the bustling Gran Via in the run up to Christmas.

Gardens have been grown on buses by PhytoKinetic, a company operating in Barcelona, Girona and Palma de Mallorca.