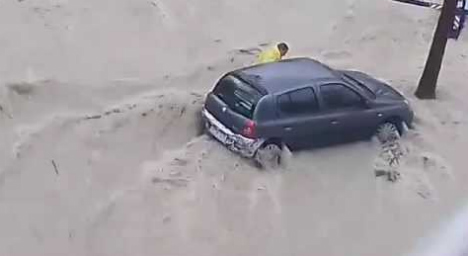 A man was dragged away in the strong current in Finestrat. Photo: MeteOrihuela

A fifth man was reported to have died after becoming trapped in a cave as it filled with water after torrential rain.

The 58-year-old was rescued alive from a cave in Xàtiva, about an hour inland from the Valencian coast and taken to hospital where he later died.

A 47-year-old became the latest victim on Monday night after he was trapped in a flooded underground garage near his home in Los Alcázares in Murcia.

A specialist diving unit from the fire service found his body after his wife raised the alarm when he failed to return after saying he was going to check on the car.

Earlier on Monday in the same town, a 40-year-old man drowned after he was swept off his feet by a torrent of water and dragged into a swimming pool.

The Murcia region has been among the worst affected by the weekend of torrential rain and the region was put on Level 2 Emergency plan with the armed forces being called in for support.

Meanwhile up the coast in the Valencia region the bad weather claimed another two lives over the weekend.

A man died after his car was swept away and overturned in a flash flood in Castellon.

And in Cala Finestrat, next door to Benidorm, a man was dragged into the sea as he attempted to reach his car, He had tried to reach the vehicle which was parked on the main thoroughfare of the resort despite the road being turned into a fast flowing river.  The incident was caught on camera by an onlooker who urged him to turn back.

Schools have been closed across Valencia and Murcia and many roads have been blocked.