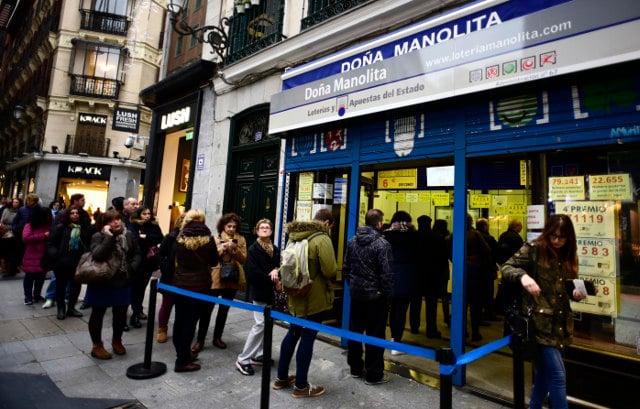 Two years ago, a district in Madrid got lucky in Spain's hugely popular Christmas lottery, with people working or living there winning prizes of between 120,000 and 3.0 million euros.

As Spaniards gear up for the next windfall from the world's richest lottery known as El Gordo, or the “Fat One”, AFP asked the 2014 winners in the Almagro area — and people who know them — how their lives had changed.

The answer? Some retired early, others opened a new business and one football betting addict lost all his money. But, by and large, many kept going steadily on in the same job.

Their profiles vary widely, from 32 workers at Madrid's Wax Museum — 80 percent of whom continue to work there — to employees of the exclusive Genova Financial Club, shopkeepers, insurance brokers and nuns.

Unlike other big lotteries that generate just a few big winners, Spain's Christmas lottery aims to share the wealth, with thousands of numbers getting a prize.

“On the Wednesday I signed for a bank loan (to buy the store), on the Thursday the lottery ticket seller gave me a ticket as a gift, and on the Monday I won,” Aguirre told AFP.

The father of two teenage boys said winning the money had had a hugely soothing effect, “as if they operated on the nerves”.

The man behind this lucky turn of events was Lino Cuervo, the local lottery ticket seller whose shop is just a few metres away from the stationery store.

That year, he became Father Christmas, earning his customers 416 million euros in winning tickets out of a nationwide total of 2.2 billion euros.

He and his family also profited from winning tickets, prompting such an outburst of merriment and partying that his daughter went into labour and gave birth the next day.

The Christmas lottery has been held uninterrupted in Spain since 1812, even during the 1936-39 civil war when each side held its own draw during the conflict.

It has become a popular Christmas tradition in Spain with friends, colleagues and bar regulars banding together to buy tickets.

The decision of many winners to continue with their normal lives is not surprising.

A 2005 study by Sweden's University of Gothenburg found that 62 percent of those who won the lottery in that country had continued to work.

Another study published in 2010 by three US researchers analyzed the evolution of close to 35,000 lottery winners in Florida between 1993 and 2002.

They found that the windfall did not solve their money problems in the long term.

Javier Gaite, a financial adviser specializing in income management, said the best option was to save money, pay off any existing debt and “invest carefully”.

Many of those interviewed by AFP did just that, including some of the 25 employees of the El Mentidero de la Villa restaurant.

“I still haven't touched it. It's in my daughters' fund, in the bank,” said Ynglada, who now works in another restaurant and has no intention of quitting as chef.

It's the same story — albeit with only around 100,000 euros — for Daniel Drouet, an Ecuadorian waiter at El Mentidero de la Villa.

He has placed his winnings in a fund at an international bank, with a view of potentially opening his own business later.

“I don't want to hurry, I want to think about it and see,” he said.

One man who did quit his job was head chef Daniel Domingo. Instead, he opened a shop selling — guess what? Lottery tickets.

The business was financed along with his wife and another colleague using their combined winnings of 360,000 euros.