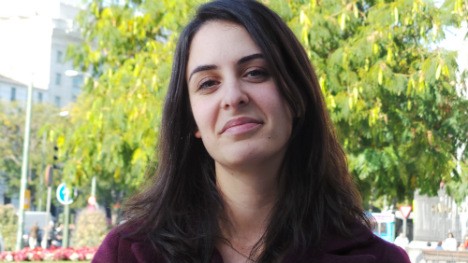 Photo: Montserrat Boix/Wikimedia
In March, a court found Rita Maestre, a 28 year-old Podemos councillor and former student of the far-left party's leader Pablo Iglesias, guilty of “infringing on freedom of conscience and religious convictions”.
When still a student, she burst into the chapel with some 50 others at Madrid's Complutense University, in protest against what they said was the Roman Catholic Church's “antidemocratic and chauvinistic” positions.
She took off her t-shirt, showing her bra, and others went completely topless during the demonstration.
The protest had sparked an outcry, leading to discontent from right-wing politicians and the Church, and it turned Maestre into a favourite target of Spanish conservatives.
Public prosecutors had asked for Maestre to be sentenced to a year in jail, the maximum penalty allowed under Spanish law for the crime, but she was fined 4,320 euros ($4,500) instead.
But an appeal court said Friday it had cancelled the sentence, considering that “inadequate clothing or certain inappropriate gestures” were not “an act of desecration”.
On Twitter, Maestre said she was “happy, satisfied and proud”.
“Good news for freedom of expression,” she added.