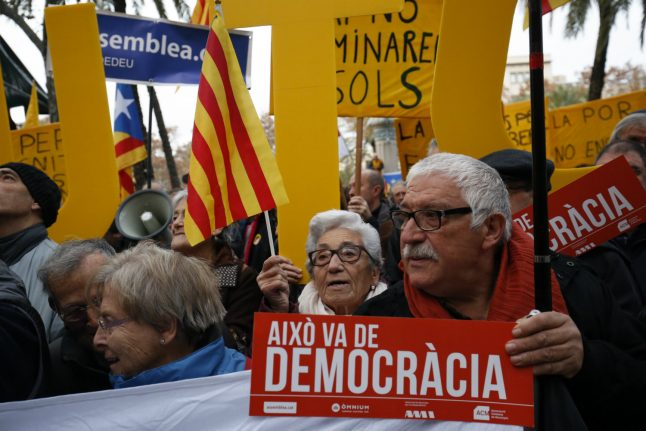 Photo: Pau Barrena/AFP
The crowd, which included some 400 pro independence mayors, waved red and yellow Catalan independence flags, sang the regional anthem, and chanted “You are not alone” as she arrived at the Barcelona court.
Forcadell, a leading figure in Catalonia's independence movement, is under investigation for “serious disobedience” after letting the regional assembly in July debate and vote on a resolution on steps to achieve independence for the wealthy northeastern region.
Spain's Constitutional Court had ordered that the debate and vote not go ahead, arguing it was a step towards secession.
“I explained to the judge that I acted correctly,” Forcadell said after her court appearance.
“No court can prevent parliament from debating independence or any other topic.”
Spain's conservative central government, which fiercely opposed Catalonia's independence drive, defended the court's decision to probe Forcadell.
“No one can have carte blanche to disobey laws or to act with impunity,” government spokesman Inigo Mendez de Vigo told reporters after a weekly cabinet meeting.
Pro-independence parties won an absolute majority in Catalonia's 135-seat regional assembly for the first time in local elections in September 2015.
Catalan President Carles Puigdemont pledged in the autumn to hold an independence referendum in September 2017, whether or not the central government in Madrid agreed, and Catalonia's regional parliament subsequently approved his plan.
But Spain's Constitutional court on Tuesday suspended the resolution calling for the referendum while it decides on its legality.
Spain's central government has ruled out any possibility of Catalonia, which accounts for almost a fifth of Spanish economic output, becoming independent.
Polls show Catalans overwhelmingly support the right for an independence referendum but are evenly divided on secession.