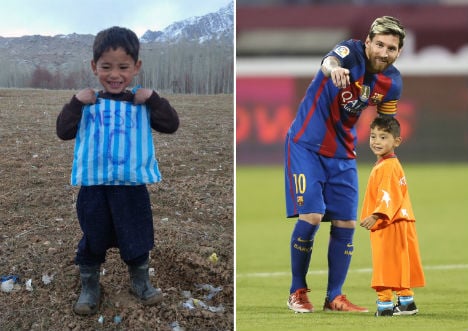 This week, almost a year after the image went viral, Murtaza Ahmadi finally met his hero… and walked onto the pitch beside the Barcelona star.

Murtaza was flown from his home in Afghanistan to Qatar to meet his idol, and the Barça team, as they played a friendly against Al Ahli.

The meeting was arranged by the organizing committee of the 2022 Wold Cup in Qatar.

Remember Murtaza Ahmadi? The guy whose pic wearing a Messi shirt made of plastic went viral.
He met Messi today.

“I’m very happy to have met my hero. It is a dream for me,” said the boy wearing a huge smile and a real Barcelona jersey.

He accompanied the team onto the pitch ahead of Tuesday’s match, clutching the hand of the five-time winner of the Ballon d’Or.

The child shot to worldwide fame in January when photographs of him playing football in the snow near his home in eastern Ghazni province went viral.

Then five-years-old, Murtaza was wearing a Messi jersey improvised by his older brother from grocery bags.

He was then sent his very own official shirt, signed by the Barça player who is a Unicef Goodwill Ambassador.

But international interest in the story also brought fears that he would be kidnapped because of his sudden notoriety and the family were forced to flee Afghanistan and settle in neighbouring Pakistan.

“Life became a misery for us,” said the father at the time, speaking from the Pakistani city of Quetta, where the family had settled.