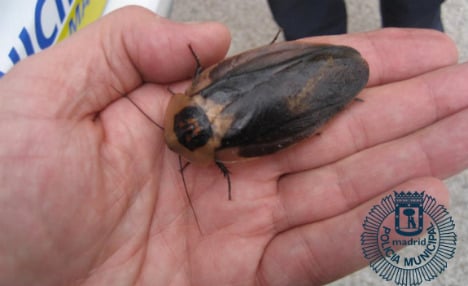 The insects, which are native to Madagascar, can grow to between 5 and 7.6 cm and can live for up to five years.

Bizarrely, some people find they make good pets. However, who ever owned these 54 crawlers obviously had enough of them.

“We have no idea how these giant cockroaches came to be here,” a police spokesman told Europa Press. “Somebody must have dumped them.”

Officers from the environmental unit of Madrid’s Municipal Police force went to collect the bugs and they have been taken to a wildlife centre in the capital.

The insects are one of 20 known species of large cockroaches that emit a  hissing sound produced by forcibly expel air through the specially-adapted respiratory openings on the fourth segment of their body.

They have no wings and in the wild, they live in rotting tree trunks.