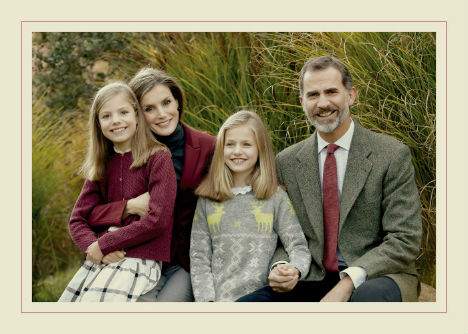 The heir to throne sports her festive knit as she appears with her younger sister Sofia, 9, and her parents, King Felipe VI and Queen Letizia.

The familiy’s outfits are carefully colour-coordinated in shades of maroon and grey, with King Felipe’s tie matching the burgundy of his wife’s blazer and his younger daughter’s cable-knit cardigan.

The message inside reads: This year the royal palace chose a family snap for the official Christmas Greeting but in 2015, the King and Queen didn’t appear at all, instead sending out an image of their two smiling daughters.