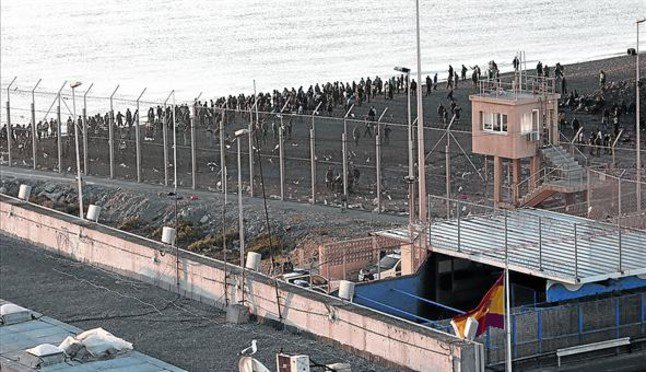 The group scaled two entry points in the six-metre-high (20-feet) barrier that surrounds the enclave, a local government spokesman said.

Footage posted online by the El Faro de Ceuta newspaper showed dozens of migrants, including men without shoes and shirts, letting off joyous cries of “Spain!” as they crossed into Ceuta.

The Red Cross said it had treated 103 people for minor injuries sustained during the assault, and that 25 had been taken to hospital.

About 20 percent of the group who rushed the gates had not been located by authorities as of midday on Friday, Spain's Interior Minister Juan Ignacio Zoido said.

Ceuta along with Melilla, another Spanish territory in North Africa, have the European Union's only land borders with Africa.

They are favoured entry points for African migrants seeking a better life in Europe, who get there by either climbing over the border fence or by swimming along the coast.

The objective for migrants entering Ceuta illegally is to reach a temporary Spanish residency rights centre where they can, in principle, request asylum.

But Amnesty International and other rights groups have qualified Ceuta and Melilla as extra-legal territories and denounced police mistreatment of migrants there.

In 2014, 15 migrants drowned as dozens tried to swim to Ceuta from a nearby beach.

At the time, human rights groups and migrants said Spanish police tried to keep them from reaching the shore by firing rubber bullets and spraying them with tear gas.

In October a group of about 220 people managed to storm two entry points into Ceuta, injuring 35 migrants and three security officers.

“You have to go back to the early 2000s to see numbers like this,” the government spokesman told AFP.