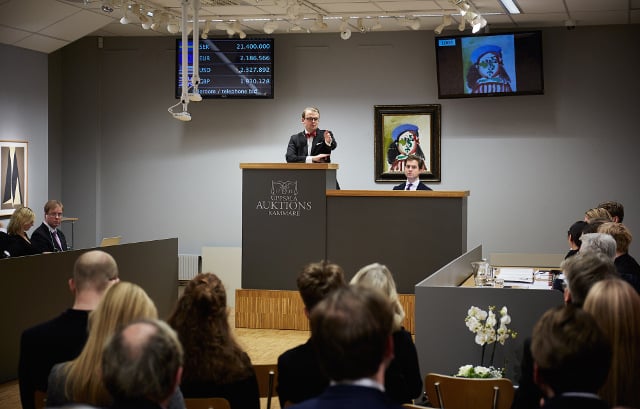 Deep pockets were needed to claim one of the works. Photo: Uppsala auktionskammare

The paintings were formally part of the Neuman Collection, a collection of artwork compiled by Swedish businessman Bertil Neuman, who died in 2011. The works, which came to Sweden during the 1970s and 1980s, were auctioned off at Uppsala Auction House (Uppsala auktionskammare) on Wednesday night.

“Go out on the street in any city in any country and ask ‘Who is Pablo Picasso?’. Everyone would know he’s one of the foremost painters of the 1900s,” Uppsala Auction House CEO and Picasso expert Magnus Behed told The Local.

“It’s a world name. So there were customers all over the world interested in these paintings.”

The painting had been showed in London, Paris and New York during October, helping to entice bidders from all over the world.

“’Fillette au béret’, which dates from 1964, is a very typical Picasso painting. If you were to hide the signature, everyone would still know it’s Picasso,” Behed explained.

“Nus”, a painting from the latter stages of Picasso’s life, went for 10.53 million kronor ($1.16 million) from a starting price of between 3-5 million kronor. Two of the Spaniard's other works, “Femme nue se coiffant” and “Le repos”, also sold for millions.

Wednesday was the first time that four Picassos had been auctioned off in Sweden.

“Having four of these in Sweden is completely abnormal. It was fantastic. You’d call it a white-glove sale. Everything sold, and for 80 percent over the starting price. So it’s a very big success, a very big success,” Behed beamed.