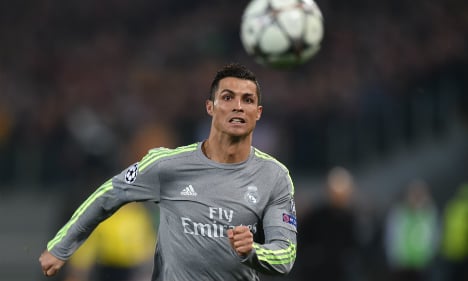 Judge Arturo Zamarriego issued an injunction against all 12 outlets – including Spain's El Mundo and Germany's Der Spiegel – at the demand of Senn Ferrero, a Spanish legal advisory firm that claims some of the information was obtained through a cyber-attack on the company.

“I'm surprised,” Inigo Mendez de Vigo told Spanish radio when asked about the injunction, while acknowledging he had not seen the full document.

The first leaks unveiled Friday as part of the European Investigative Collaborations (EIC) journalists' consortium centred on “a system” allegedly put in place by Jorge Mendes, the agent of Ronaldo and Mourinho.

They allege for instance that Ronaldo could have “hidden €150 million (from image rights) in tax havens in Switzerland and the British VirginIslands.”

Both Ronaldo and Mourinho maintain they have fully complied with Spanish and British fiscal requirements.

Still, Spanish tax authorities are investigating the allegations where Ronaldo is concerned.

The judge's injunction, seen by AFP, claims that the leaks could constitute an offence against the right to privacy because they were allegedly obtained through the cyber-attack on Senn Ferrero.

But in a story on Monday, French investigative news website Mediapart – also part of the EIC consortium – refuted the cyber-attack allegations, saying the source at the origin of the leaks denied this.

This is an attempt at censorship on the scale of an entire continent,” it wrote.

In weeks to come, the media organisations, which also include The Sunday Times in Britain, say they will also publish allegations of prostitution and exploitation of minors in football.