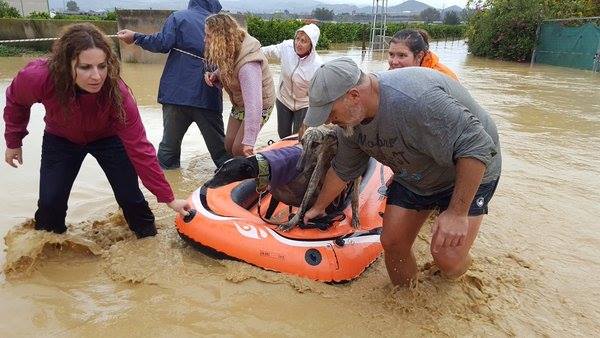 Further down the coast towards Gibraltar, an employee from electricity firm Endesa died after his car was swept away in flash flood on the outskirts of La Linea, as he attempted to reach an industrial estate to repair a transformer.

Spain’s meteorological agency Aemet issued a red alert across the Costa del Sol on Sunday morning and that was lowered to amber alert for Monday as the rain continued.

Some roads remained closed due to flood water and at least five municipalities closed the schools on Monday morning, including Estepona, Manilva, Casares and Mijas.

Emergency services said they had to rescue 83 people across the southern stretch from Malaga to La Linea.

In Malaga, Guardia Civil filmed the dramatic resuce of a man and his dog.

And a dog rescue centre also had to be evacuated in Mijas.

After intense rainfall streets were turned into rivers.