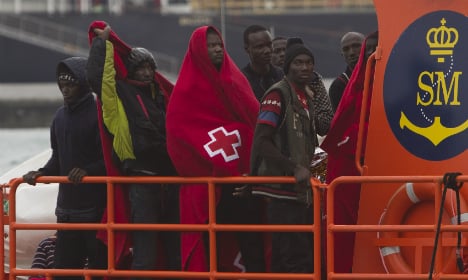 Among those rescued were 63 people from sub-Saharan Africa, officials saidwithout specifying their nationalities, and 29 Algerians.

Most of the migrants were taken to the port of Malaga in southern Spain,following a “complicated” rescue operation in rough seas around 49 nautical miles from the coast, a maritime rescue official told AFP.

The group included three women and a child as well as a boy who had to behospitalised after suffering from hypothermia.

Also on Saturday, Spanish authorities stopped 22 migrants hiding in a lorrywho were trying to enter Melilla, a Spanish enclave in north Africa which, along with another enclave called Ceuta, are the only land borders between Africa and the EU.

Authorities used a system that detects heartbeats to detect the migrants,said Irene Flores, a spokeswoman for the Melilla government.

The 22 were taken to a migrant centre in Melilla where they will beeligible to lodge a request for asylum. The lorry driver and his assistant were detained.

The Spanish interior ministry has said more than 11,600 migrants andrefugees arrived in Ceuta and Melilla last year, the majority from Syria – a 55 percent increase from 2014. The combined population of the two enclaves is just over 170,000.