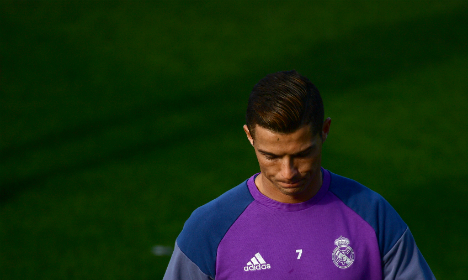 A group of 12 European newspapers made the allegations based on leaked documents obtained by German weekly Der Spiegel.

Both Ronaldo and Mourinho say that they have fully complied with British and Spanish fiscal requirements.

“The information in the hands of the tax office correspond to what we have learned in the media,” Jose Enrique Fernandez de Moya, secretary for Spain's tax office, told radio station COPE.

“What I can say is that the tax agency is an extraordinarily professional agency and, as it has to, will carry out the inspections it sees fit.”

Lawyers for Ronaldo told the newspapers at the heart of the investigation that a Spanish tax audit aimed at the Portuguese was “still in progress.”

Ronaldo is far from the only high profile footballer to find himself investigated by the Spanish tax authorities.

Earlier this year, Barcelona superstar Lionel Messi was given a 21-month prison sentence while fellow Argentine Javier Mascherano was handed a one-year suspended sentence, both for tax fraud.