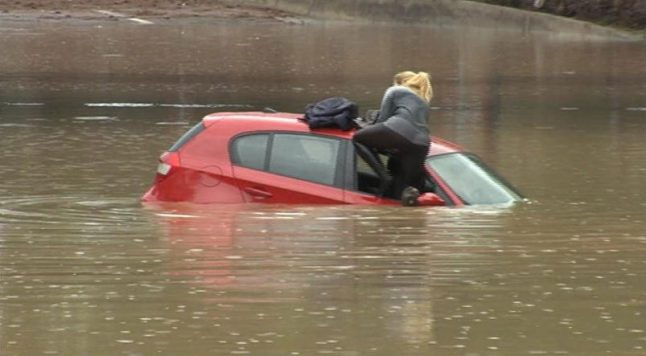 But a news crew with a camera just happened to catch Zary Frías as she wriggled out of the passenger window of her quickly disappearing red BMW and hauled herself onto its roof.

The 44-year-old had apparently failed to see that the road was diverted because of flooding and drove into the underpass, thinking that it was only a puddle.

But torrential rain across eastern Spain had caused the underpass to flood.

After sitting on the roof until the car sank below the surface she then stood on it as it gently floated downstream. After a few minutes she was rescued by an emergency crew and was hoisted onto one fireman’s shoulders and taken to dry land.

She later explained to the local newspaper Las Provincias that despite looking calm, she had been scared out of her wits.

“I was distressed and didn’t know what to do,” she said. “People were screaming at me to stay on the car and others to swim for safety. But in the end I opted to wait until rescuers came.”

“I’m lucky I was able to climb out of the window. If I had been elderly or with a young child I don’t know what would have happened.”

She insisted that she hadn’t noticed the ‘road closed’ signs. “By the time I realised the water was so deep, I tried to back out but then the engine cut.”

The video has been shared thousands of times on social media sparking the inevitable memes.

It has been reported that over 100 litres of water per square metre landed in Sagunto over the weekend.

Further north in Catalonia, a 20-year-old woman drowned after being swept away as she attempted to leave her car when it was caught in a flash flood.