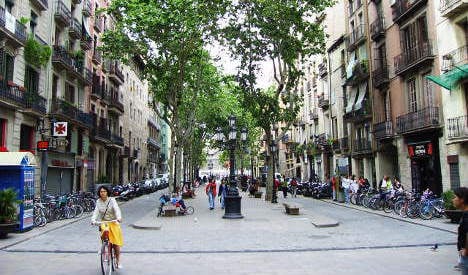 Calle de las Huertas runs from the Plaza del Ángel to the Plaza de la platería de Martínez and the name means 'street of gardens' because of the fields that were once there in the 17th century. Now, however, it is more often characterized by its endless bars, restaurants and nightlife – perfect for grabbing a caña or some other beverage for your stroll. Passeig del Born stretches from the Born market to the Santa Maria del Mar Basicila. Someone ambling along this route could easily turn the corner on Carrer de Montcada to find the Picasso Museum or the European Museum of Modern Art. This medieval passageway also hosts Holy Week processions and other fests.

Calle Cimadevilla within the Asturian capital leads La Plaza de la Catedral to La Plaza de la Ayuntamiento. One of the best known streets in Oviedo, it recalls the atmosphere fictionalized by Clarín in La Regenta.

Walking this street within Seville's former Jewish quarter, Santa Cruz, is a must. Seville is known for its winding, narrow streets, and Calle de Mateos Gago will take you from the Seville Cathedral through one of the prettiest areas to explore little alleyways and tiny passages, barely separating colourful Andalusian buildings. Calle Sant Miquel is one of the most frequented by pedestrians, so you won't be alone on your afternoon excursion. The street runs cuts through the historic centre of the city and is dotted with numerous outdoor restaurants and terraces. We are sort of cheating here, because our tip for Bilbao’s best strolling street is not one street, but seven. 'Seven Streets' is what locals call the medieval heart of Bilbao’s old town, home to pintxo bars, quirky shops and beautiful old churches.