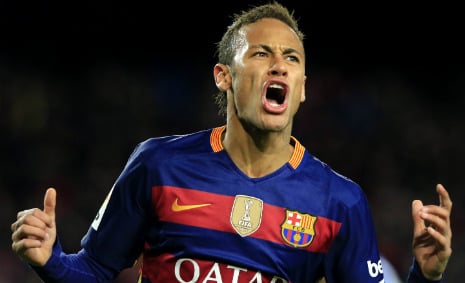 The Barça star and his family will fo to court over dodgy transfer. Photo: AFP

Prosecutors are also seeking a five-year sentence for former Barcelona president Sandro Rosell – who resigned over the scandal in 2014 – on counts of fraud and corruption, but dropped charges against current president Josep Maria Bartomeu.

The case initiated with a complaint from Brazilian investment company DIS, which owned 40 percent of Neymar's sporting rights at the time of his transfer from Santos in 2013.

In presenting their case on Wednesday, DIS called for five-year sentences for Neymar and his parents, eight years for Rosell and Bartomeu and a mammoth €195 million fine for Barça.

However, DIS also recommended that Neymar be banned from playing football during any judicial sentence.

Barcelona initially announced the cost of the move at €57.1 million, €17.1 million of which was paid to Santos with the remaining €40 million paid to N&N, a company owned by Neymar's family.

However, Spanish authorities believe the real cost escalated to €83.3 million.

DIS received €6.8 million, 40 percent of the fee paid to Santos.

The company believes it was cheated of its real share because part of the transfer fee was concealed by Barcelona, Santos and the Neymar family.

Moreover, DIS also argued a pre-contract agreement between Neymar and Barça signed in 2011 impeded other clubs from making offers for the player, affecting the value of the transfer fee.

The decision is another blow to the image of the Spanish champions and the player himself, who signed a lucrative new contract to remain at Barça till 2021 in June.

Barça hoped to bring an end to the murky affair when the club agreed to pay a 5.5-million-euro fine in a deal with prosecutors in June to settle a separate case and ensure the club avoided trial on tax-evasion charges over the transfer.