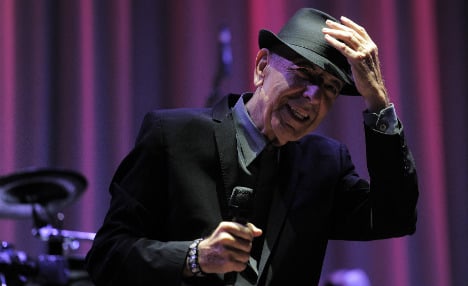 Released in Spain on Friday just one week after the death of the Canadian poet and musician, the documentary tells the story of “Omega”, which became one of the most innovative albums in the history of flamenco when it came out in 1996.

Morente controversially joined forces with alternative rock band Lagartija Nick to adapt the words of Lorca and Cohen songs such as “Hallelujah” or “First we take Manhattan” in Spanish.

For Cohen, a huge admirer of flamenco and Lorca – so much so that he named his daughter after the Spanish poet – the record was a delight.

“He was hugely pleased, hugely moved. 'This is the best thing that has happened to me', he told me,” said his biographer and friend Alberto Manzano.

“The miracle was that Morente saw that there were flamenco elements in his songs and that's what most moved Cohen,” he told AFP.

Years later in 2011, Cohen himself acknowledged this when he received the Prince of Asturias Award for Literature, considered the Nobel of the hispanic world.

“Everything that you have found favourable in my songs and my poetry are inspired by this soil,” he said when accepting the prize.

In an emotional speech, Cohen explained that he had been unable to find his voice as a poet until he read the verses of Lorca, murdered by nationalist forces during Spain's 1936-39 civil war.

READ MORE Leonard Cohen: How Spain gave him his song

And he paid homage to a Spanish guitarist he discovered playing in a park in Montreal, and who agreed to teach him.

He only had a few classes with the unnamed man, who committed suicide soon after, but they were enough to mark his career.

“It was those six chords, it was that guitar pattern that has been the basis of all my songs, of all my music,” he said.

According to Manzano, Cohen had always said Lorca made him a writer, but he couldn't earn a living that way.

“And this Spaniard in Montreal saved his life when he went to New York to sell his songs.”

Through interviews and archive pictures and video of rehearsals and shows, the documentary directed by Jose Sanchez-Montes and Gervasio Iglesias recounts the creation of a cult record that is still controversial to this day.

Originally, the project consisted in adapting Cohen to flamenco, as a gift for the Canadian artist for his 60th birthday in 1994.

But then Morente went further. He added one of Lorca's most important works, “Poet in New York”, to the repertoire.

He also broke the mould by incorporating the rock of Lagartija Nick at a time when flamenco was still relatively closed to other styles.

The result: a rush of emotions in which Morente sings the verses of Cohen and Lorca with his powerful voice, accompanied by a fusion of synthesisers and folk singing, drums and flamenco “palmas” (handclapping), electric and classic guitars.

“There are people who still don't understand it because it disturbs them, it dirties their vision of flamenco,” said Antonio Arias, Lagartija Nick singer, who added it nevertheless helped open flamenco up.

The documentary shows Morente's doubts about the whole enterprise, the pressure not to continue and even the contempt of theatre-goers in Madrid when he did a surprise performance with Lagartija Nick at the end of one of his concerts.

Twenty years after “Omega” was launched, director Jose Sanchez-Montes decided to make this commemorative documentary to try and develop a wider, more objective understanding of the album.

“If it came out today, we would say that this record is too modern. That's how transcendental this work is,” he said.

Cohen, however, declined to participate in the documentary due to his fragile health, and he only appears in excerpts from a 1997 interview.

“The really sad thing is that Cohen wasn't able to see it as I think he would have liked it,” said Sanchez-Montes.