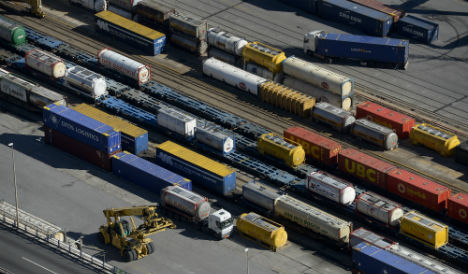 The ten Kurds were found in a container transporting clothes. Photo: AFP

Catalan authorities said the five men, one woman and four children, was discovered when the container was opened at a Mango depot in Llicá d’Amunt, 30km from Barcelona.

The group, who said they were Kurds from Iran, were stunned to discover that they had arrived in Spain.

“They were really in shock when they first came out of the lorry as they thought they were in England, where they had paid to be taken,” explained Oriol Amorós , the  Catalan government’s head of equality and immigration.

He confirmed that the ten people would be cared for by authorities in Catalonia while their asylum requests were processed.

“They are being looked after in a safe and decent place”, Amorós told reporters on Wednesday. “They are in good health condition, although one of them suffered an anxiety attack and another minor problems related to being hidden inside a lorry for many hours”, he said.

It is thought the group were hidden inside the container in Turkey, either when it was packed in Istanbul or at the port in Izmir where it was loaded onto a container to make the 48-hour Mediterranean crossing to Séte in the south of France.

They suffered “a very difficult journey… escaping from a situation where their human rights were threatened,” said Amorós.

“The Catalan government will do everything in its power to give them asylum,” he added.