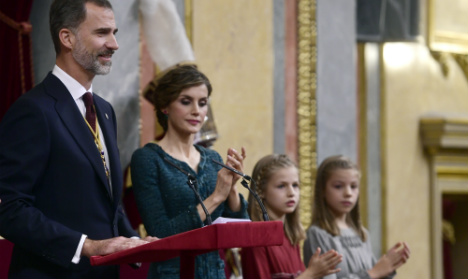 The matter is particularly close to heart for Felipe VI, whose sister is on trial over the alleged illegal business dealings of her husband.

At the same time, ex-lawmakers and politicians from the ruling conservative Popular Party are on trial in one of Spain's biggest graft scandals – the so-called Gürtel affair – involving alleged kickbacks, fake invoices and
Swiss bank accounts.

“Corruption… must become but a sad memory of a scourge that we have to defeat,” he said in a speech that was given a standing ovation, except from lawmakers belonging to far-left, anti-monarchy party Podemos, many of whom stayed seated.

The period was marked by two elections that produced no clear winner as upstart centrists Ciudadanos and Podemos upset the traditional two-party system.

Rajoy's comeback was only made possible after the Socialist party decided to abstain in a crunch parliamentary confidence vote in October, instead of voting against him.

But unlike in 2011 when he came to power with an absolute majority, the PP only has 137 out of 350 MPs, meaning Rajoy will have to negotiate every bill with the opposition.

Among those in the opposition are 71 lawmakers from a coalition made up of Podemos and smaller, former communist party Izquierda Unida, many of whom are anti-monarchy.

Several lawmakers stayed seated during the national anthem, and union leader Diego Canamero wore a black sweatshirt with the statement “I didn't vote for any king” written in white.

Carolina Bescansa, a high-profile Podemos member and lawmaker, earlier tweeted a warning message to the queen.

“Letizia, if you're going to take your daughters to the chamber, be prepared for a campaign of unlimited insults,” she said.

Bescansa was referring to her own experience of bringing her baby boy to parliament in January, when it opened albeit without a fully-functioning government – a move she was strongly criticised for.