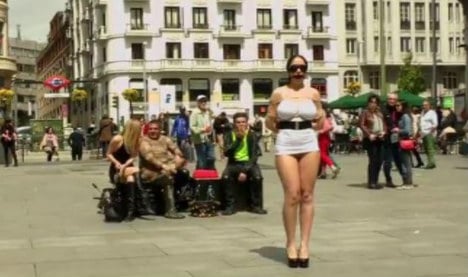 A0 bondage scene was shot in Plaza de Callao.

Earlier that morning, the same woman had been seen with her breasts bared, arms tied behind her back and wearing a ball gag as she was led through the streets in front of Madrid’s Reina Sofia.

While some onlookers gaped open mouthed at the scenes before them, others took out their mobile phones to record their own footage and one young mother dragged her child away while shouting reprimands at the women to cover up.

A scene shot one October morning near Atocha.

The photos were published on Wednesday in Spain’s El Mundo newspaper which questioned whether a crime had been committed.

Madrid’s City Hall confirmed that no official filming permits had been authorized but explained that none were needed unless filming involved the use of cameras on tripods.

Police are considering whether the scenes could be considered “a crime of exhibitionism” under the Citizen Security Law which carries fines of between €100- €600 for public displays of nudity.

According to a report in the Catalan newspaper El Periodico, most of the film-makers shoot their scenes quickly and if caught, put fines down as an expense.