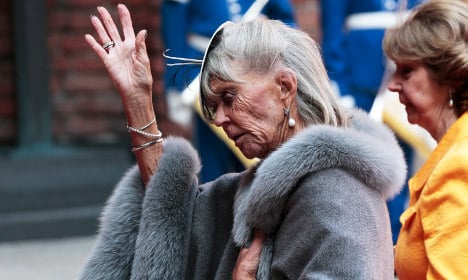 Vocento, one of the largest multimedia groups in Spain, reported on several of its news sites – including El Diario Vasco and El Comercio – on Saturday that the Swedish princess had tragically committed suicide.

“Surprised at not having seen the sister of King Gustav in a week, and noting that her car was in the garage, a neighbour raised the alarm. The police found her lifeless in her home next to a bottle of pills. Princess Birgitta lost her husband two years ago, Prince Johann Georg of Hohenzollern-Sigmaringen,” read the report.

It was accompanied by a picture of Princess Birgitta, who is the sister of Sweden's King Carl XVI Gustaf and lives in Spain. Her husband Johann Georg passed away away earlier this year, but not two years ago.

Swedish-language newspaper Sydkusten in Spain first suspected that the news report was not entirely correct, and when Expressen called the princess they found she was indeed alive – and rather angry.

“I think they should do a bit more research before they write those kinds of things. That's my honest opinion,” the 79-year-old royal told the Swedish tabloid from her home on Mallorca.

The report had been removed from some of Vocento's media outlets by Monday morning, but remained online on for example El Diario Vasco. The exaggerated rumours of her death were likely due to a mix-up. German media reported last week that Princess Brigitta of Prussia, 77, who lost her husband two years ago had been found dead in her house.

Princess Birgitta of Sweden is also Princess of Hohenzollern, a dynasty of former royals from the German Empire and the Kingdom of Prussia, which might explain the confusion.