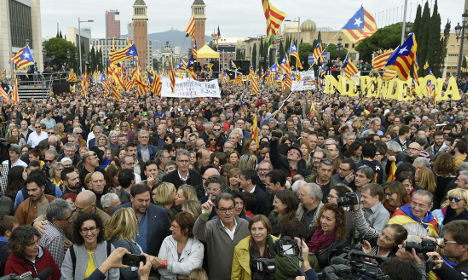 The demonstration aimed in particular at supporting Catalonia's former president, Artur Mas, and the head of its parliament, Carme Forcadell.

In November 2014, they staged a symbolic vote on independence for the wealthy northeastern region in defiance of Spain's central government.

Mas is now to stand trial on charges of “serious disobedience” and “malfeasance,” for which he risks a 10-year ban on holding office.

Both Mas and Forcadell attended the rally, which took place in front of the Four Columns, a Catalanist monument demolished during the Primo de Rivera dictatorship and later rebuilt in 2010.

Former president of the Catalan Generalitat Mas thanked the crowd and promised them “we will not falter, we’ll continue onwards. We know the importance of what we’re doing and we will give everything for this country”.

Catalans have a centuries-old culture with their own language and customs. Demands for autonomy have been fuelled by Spain's economic downturn, leading many to resent sending tax money to Madrid to prop up poorer regions.

On October 20, Spain's Constitutional Court cancelled a ban on bullfighting in Catalonia — an issue that became emblematic of the tensions.

READ ALSO: An historical look at the Catalan independence issue

Current Catalan president Carles Puigdemont did not attend Sunday’s rally in Barcelona as he was receiving the freedom of his town of birth, Amer, near Girona.

“Wherever there is a democrat in Catalonia there will also be a clear voice raised against the undemocratic drive and pulse of the central government,” he said at the event.

Puigdemont also reiterated his promise to call a referendum on whether to secede from Spain in September 2017, insisting that Catalans “will decide their relationship with Spain freely at the ballot box”.