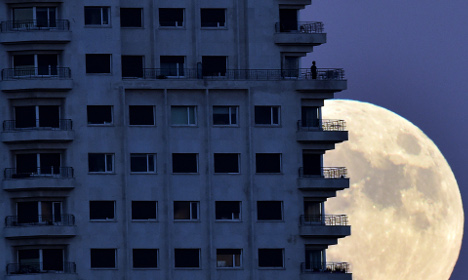 A man on his Madrid balcony with the supermoon behind him. Photo: Gerard Julien/AFP

Lucky residents of the Spanish capital took advantage of a clear night to snap some early shots of the supermoon on Sunday. American Nick Parker's images are pretty special, as is AFP photographer Gerard Julien's picture of the moon behind the España building. Girona at the foot of the Pyrenees is one of Catalonia's most beautiful cities, and its well-preserved old town contains an abundance of striking buildings. The towers of the cathedral and the church of Sant Feliu look even prettier than usual when combined the moon in the images below. Seville's cathedral is not only the oldest Gothic cathedral in the world, it also boasts the Giralda, a bell tower pre-dating the church itself which was originally a minaret and serves as a reminder of Spain's Moorish past.

Both look pretty incredible under the moon in the below image, as does the city's plaza de toros, which can be seen in the foreground.

As far as cathedrals go, they don't come much better than the one in Santiago de Compostela, Galicia. Part of a UNESCO World Heritage site, it also looked breathtaking on Sunday.

Leaving the urban hubs for the countryside was the best way to make the most of the moon in some parts of Spain on Sunday as it meant reduced light pollution. Meteorologist Jordi Queralt and astronomer Joan Anton Català took some particularly great snaps over rural Catalonia.

Not everyone in Spain was fortunate enough to experience weather conditions that made moon-watching possible yesterday however. Basque city Bilbao is famously cloudy during the winter months, as the blow attempt to capture the supermoon proved. Hopefully they'll get luckier tonight.