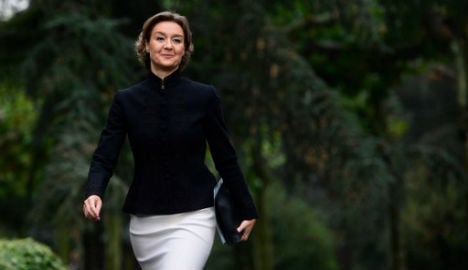 Environment Minister Isabel Garcia Tejerina arrives to attend the first meeting of the Council of Ministers on November 4. Photo: Pierre-Phillippe Marcou/AFP
Conservative Prime Minister Mariano Rajoy's new government, which was sworn in last week, will introduce the agreement in parliament on November 3 so it can be ratified “as soon as possible”, she told a news conference after a weekly cabinet meeting.
“Ratification will allow us to participate fully in all the decisions which will start to be adopted” after UN climate talks currently underway in Morocco which Rajoy will attend, she added.
Spain took nearly 10 months to establish a government after two inconclusive general elections and several unsuccessful attempts to form a coalition in a country where the traditional two-party system was shattered by
the rise of new political parties.
More than 100 nations representing 70 percent of greenhouse gas emissions have inked the historic Paris Agreement, the world's first universal climate pact, which came into force in early November.
But the future of the pact — which aims to cap global warming at well below two degrees Celsius (3.6 degrees Fahrenheit), and 1.5 Celsius if possible, compared with pre-industrial levels — is in doubt after Republican
Donald Trump's surprise election win in the US.
Climate change denier Trump, who has made no secret of his disregard for the United Nations, pledged earlier this year to withdraw from the Paris climate deal. In contrast, current US President Barack Obama has been a
champion of the pact.
Tejerina said she was confident that Washington would not abandon the pact.
“It is a change in the global economy which already is unstoppable, not only by governments, but also by companies. We have to wait and see how the new American administration responds,” she added.
Spain is one of the biggest consumers in Europe of fossil fuels. The country also has little or no oil reserves, making it heavily dependent on imported oil.
Oil accounts for half of its energy consumption while natural gas accounts for roughly 20 percent.
The country encouraged the development of renewable energy in the 2000s through generous government subsidies awarded by the previous Socialist government.
But Rajoy, in power since 2011, slashed the subsidises as part of wider austerity measures aimed at reducing a ballooning public deficit. Spain has the world's fourth biggest wind park after China, the United
States and Germany.
Spanish renewable energy group Gamesa last month approved a merger with the wind power division of German engineering giant Siemens which will create a global giant in the sector.