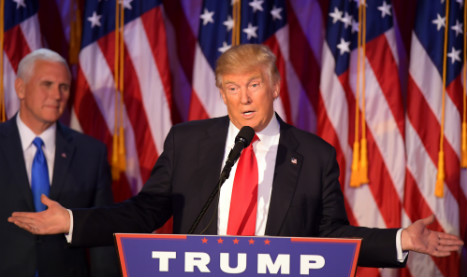 Donald Trump will be the next president of the USA: Photo: AFP

Americans who have made Spain their home have expressed “shame” and “heartbreak” at waking up to discover that Donald Trump has been elected as the next president of the USA.

Sienna Brown, who runs the successful Las Morenas De España website from Murcia in southern Spain said she was heartbroken at the result.

“I woke up this morning heartbroken, both at the state of America and also what the future could look like for those still living there. The fact that someone who is so blatantly racist, sexist, xenophobic… (the list goes on) can be in such a high position of power is terrifying.”

Nicole Angela, an American who moved to Madrid a decade ago and who now organizes wine tours in Spain told The Local of her disappointment at the result.

“There is definitely a certain level of frustration and dismay watching your home country implode.  But also heartache because there are so many good people who are going to directly suffer the consequences of this election,” she said.

“As an African American woman, I specifically see issues such as police brutality, incarceration, education and reproductive rights going right out the window.  Also living here I am so much more aware of the consequences for the world community.  The US has been struggling for years with how to change, what most people see as a broken political, economic and social system. A system that clearly favors rich over poor, men over women and white over black.  Unfortunately, the Trump campaign took the reins of the conversation by playing the same old blame game, targeting the usual suspects: immigrants, women, blacks, etc,” she said. “In doing so, we lost an important opportunity to talk about justice because he encouraged a bunch of white people to yell and scream about their losses isolating them from the larger picture of job loss, economic instability and struggle that most Americans face. Sadly, the only candidate who successfully did talk about justice for everyone was Bernie Sanders and we was not the Democratic nominee.”

Like many Americans who have made their home in Spain, she believes it will be difficult to explain the result.

“On the whole, I think Spaniards are confused at best or frustrated by our hypocrisy at worst,” she continued. “We spend a lot of time proclaiming values we have a hard time putting into practice.  Mostly I get concern and sympathy with an occasional flash of anger which I completely understand I share that with them,” she said.

Michelle Emery who lives in Jávea on Spain’s Costa Blanca, commented on The Local’s Facebook page:

“I've never been more ashamed to be an American. I feel such loss and despair for my home country today. I haven't been able to stop crying since I woke up to the news this morning,” she wrote.

“All of the equality and social progress made in the past is about to come to a screeching halt and be reversed. What are we saying to fellow Americans when electing someone as vile as Trump? It's okay to be racist and xenophobic and sexist. It's okay to bully those weaker than you. It's acceptable to be a bigot. If you're a wealthy white male you can sexually assault women. None of this is ok. How do we explain to children that this is not acceptable behavior, unless you're the POTUS? I feel like today is the beginning of the end for the United States of America. Every great empire that has fallen, has fallen from within. I pray for the safety of my friends and family that are LGBTQ, black, immigrant, Muslim, and of any minority. This is not going to be an easy road for them.”

Paul Thacker, who worked in Washington before moving to Madrid last year said: “Like a lot of independents I was going for Clinton. Despite the stench of corruption that follows the Clintons everywhere, I felt that on paper she was the most qualified person we have ever had run for President in modern times. But the voters have spoken. That is how our democracy functions, after all.”

But he expressed hope that all wouldn’t be as bad as many fear.

“For all the craziness on both sides, Trump will come into Washington and find that not everything will go the way he wants. There is a large bureaucracy in place that does not quickly respond to whoever gets voted into the White House. We are a very stable democracy, and much of how we function as a nation will continue as it has before,” he said.